There are numerous interesting and rustic villages and sites to see as you are walking the Camino. Here are some of the well-loved regions landmarks along the Le Puy route.

Espalion
Espalion is a commune in the Aveyron region of southern France. It’s well known for its architecture and the river that flows through the village. The stone and half-timbered houses are overlooked by a castle which dates back to the Middle Ages. In Espalion, the Saint Jean-Baptiste church (built in 1880) is famous for its two bronze statues at the top of the bell tower.

Conques
Conques is a typical French village. One of the major monuments of architectural and cultural heritage that lies on the route to Santiago de Compostela is the abbey-church, Sainte Foy. The church prides itself on sheltering a unique treasure of Romanesque sculpture under its vaults. Walking into Conques offers you a spectacular view of the abbey.

Cahors
Cahors is the capital of the Lot region in south-western France. The city was originally contained on three sides within a U-shaped bend in the River Lot known as the presqu’île. Today Cahors is perhaps best known as the centre of the famous AOC ‘black’ wine, known since the Middle Ages and exported via Bordeaux, long before that region had developed its own viticulture industry. Cahors Cathedral (Cathedrale Saint-Étienne) is a Roman Catholic cathedral and a national monument of France. The church was built by Bishop Gerard de Cardaillac in the 11th century.  Located in the city centre, the cathedral has the sturdy appearance of a fortified edifice.

Saint-Jean-Pied de Port
Saint-Jean is the finishing point on the Le Puy Route of the St James Pilgrimage. The town is the old capital of the traditional Basque province of Lower Navarre. This is also a starting point for the Camino Frances, the most popular route for travelling the Camino de Santiago. Saint-Jean-Pied-de-Port is famous for its beamed houses and the river which runs through the middle of the city. The Notre-Dame-de-l’Assomption church in Saint-Jean, built during the 13th century, has a specific style of architecture, characterised by its bell tower. The foot of the tower is the southern gateway to the city of Saint Jean Pied de Port, facing in the direction of Spain. 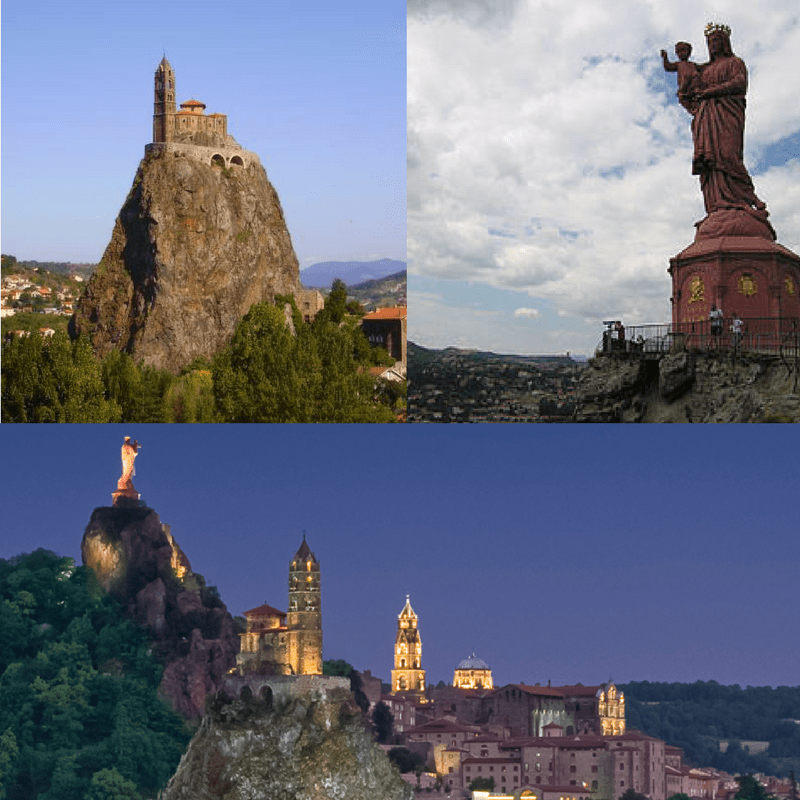 Le Puy en Velay
Le Puy is very famous because this city is the start of the Le Puy Route, a way to Santiago de Compostela. This city is also known for its cathedral, Notre-Dame Cathedral. The cathedral has been a UNESCO World Heritage Site since 1998, and is part of the “Route of Santiago de Compostela in France”. Le Puy en Velay is also famous for its church which is at the top of a big rock, in the middle of the town and for the statue of “Notre Dame de France” overlooking the city. This statue dates from 1860 and is considered the guardian of the city.

Moissac
While walking the Camino, you’ll explore cities like Moissac with its famous bridge and abbey. One of the most renowned abbeys in France, the abbey Saint-Pierre, was a Benedictine and Cluniac monastery, which has famous and important Romanesque sculptures surrounding the entrance. Many people visit the abbey every year, because it is on the Santiago Way on the Le Puy Route. Moissac is also famous for its bridge – a canal on which boats can pass to transport people.

Auvillar
Auvillar is a particular type of village and what typifies this is its centre of the town. The centre of the village is small but very warming with an old grain market, dating back to 1946. All around this grain market, each building was built with arches at their base, giving plenty of space to the area. In fact, every building in the village was built just after the Second World War, in which case they all have the same architecture. They were built with old stones and old beams. The Saint-Pierre church in Auvillar was built during the 11th century is a Roman church, built with white stones and has been renovated many times over the years.

Condom
Condom is a small city with a famous cathedral, Saint-Pierre cathedral, which dominates the town. There is also a Gothic cathedral in the city that was built in the 14th century. Saint-Pierrecathedral’s standout feature is its pipe organ. The architecture of the nave amplifies the sound of the pipe organ, creating an unusual natural sound.

Navarrenx
Navarrenx is a fortified city, ranked among “Les plus beaux villages de France” (The most beautiful trips in France). The fortifications were built during religious wars under the reign of Jeanne of Albret in 1568. These fortifications are still intact today. You can visit the city, climb the walls and discover the different techniques of the city’s defence. From the top of the walls, you have a view of the whole city. Located in the middle of the town, the Saint-Germain-d’Auxerre church was built in 1551 during the Renaissance period.

If you are interested in walking theLe Puy Route with us, or any of our other Camino de Santiago tours, then please don’t hesitate to contact our Camino experts at info@followthecamino.com