Home > Calm on the Camino 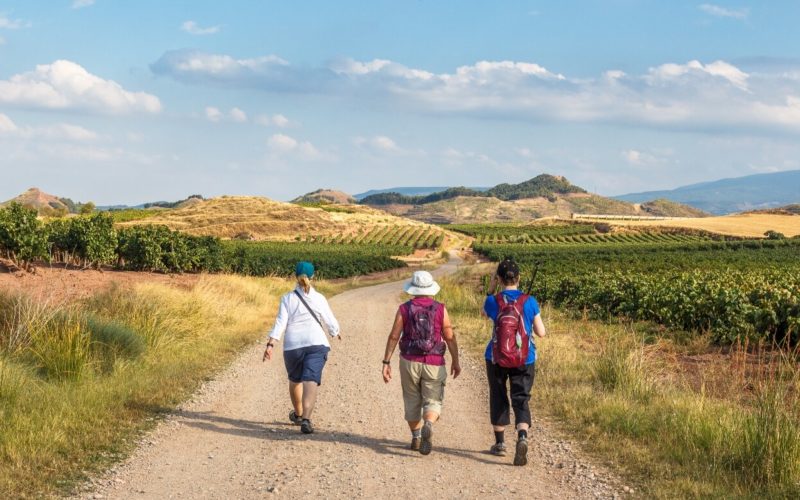 It’s not about the destination but about the journey, as Anne Sheridan discovers while walking the holy route in Spain.

One of the greatest gifts is learning to sit with yourself, a friend once said. But there are times in life when sitting with yourself can be the hardest thing to do. What if it was possible for restless souls with racing minds to be present while being on the move? It turns out there is a way: the Camino de Santiago.

For generations, the Camino de Santiago, the path of discovery for mind, body and soul through one simple exercise – walking – has become a rite of passage. Throughout history, it has held religious connotations and the road-less-travelled has become more populated. But that doesn’t diminish the importance of this very unique journey, even for the many non-practising Catholics who literally walk among us.

In truth, we were all there for a reason, though sometimes that reason wasn’t even fully known to ourselves. For some, it was the hope of mending a broken heart, of letting a little light in to heal wounds old and new.

There were those caught between two worlds – a past they tried to hang on to and a future they weren’t yet sure was theirs. Some hoped for an epiphany; others merely wanted to lose a few pounds. Actually, we all hoped for a little bit of the latter.

As I arrived at the airport in Santiago, as a lone traveller about to join a group with the Irish company, Follow The Camino, I had many visions – and a few fears – of what may lie ahead. The coming week would bring six days of walking – varying from three hours to over six hours a day, or approximately 20km – to complete the famous last 120km of the Camino on the Frances route, or the French Way.

There were imaginings that it would be a great adventure and a cathartic cleanse, similar to the film, The Way, in which Martin Sheen walks the Camino in memory of his late son.

Following the first introductions to a largely American group, my new walking buddies, I could only think: ‘This is going to be The Way meets Sideways’. There was Bridget, an Irish-American nurse, who had spent years looking after others in an intensive care ward in the States and came here to care for herself.

There were nerves, of course, not helped by those who delighted telling you in advance of how all
their friend’s toenails fell out after walking the Camino. Some had undertaken weeks of training; others simply showed up, hoping their knees wouldn’t let them down.

The legend that is the Camino – weighted in history since the Middle Ages – and what it represents,
perhaps also played on our mind. Eventually, all paths spreading out from Portugal, France, Spain lead
to the Cathedral in Santiago de Compostela in Galicia in northwestern Spain, where tradition has it
that the remains of St James are buried.

Along the way, the destination for pilgrims (pelegrinos) is marked with a series of simple yellow arrows and the scallop shell, symbolic of the Camino and carrying its own fabled legends, all centred on survival, rebirth and hope.

The night before we set off from Sarria, words of wisdom, applicable for life itself, unwittingly rolled off the tongue of our guide Francisco, from Barcelona.

‘If you find yourself at a fork in the road not knowing which direction to take, don’t worry; you will
eventually find your way back to the right path,’ he soothed.

If anyone was really struggling, there was also the option of a taxi, he advised. It’s not uncommon for some walkers to decide they have reached their own limit for that day, jump in a cab and head to a spa before the friends arrive at the hotel for dinner. Whatever we chose to do, he had one warning:

‘If you race to your destination, you will miss the whole point. It’s not about the time it takes you to complete it… It’s about the experience. Don’t expect the Camino to deliver to you; it’s your journey and you will get from it what you put in.’

Create Your Own Camino

Whether you would like to walk the Camino with an expert guide like Anne did, or you’d rather go self-guided – there is a Camino for you!

Follow the Camino is the original Camino tour company. We have over a decade of experience in creating unforgettable journeys. All of our itineraries are fully customised to you. We can add extra days, arrange transfers, and recommend the best things to see and do along the Way of Saint James!

Our Camino packages include hand-picked accommodation, breakfasts, luggage transfers, detailed walking notes, and plenty more. We also offer 24/7 emergency support while you are on the road, so you can travel worry-free! We also offer free date change on all of our trips, so if things change you are covered.

Get a free quote for any Camino holiday, or contact us to find out more about our travel options.

Experience the Flavours of the Camino in 2023!

Immerse yourself in the sumptuous food, delicious wine, and friendly culture of Spain!

Fall in love with the taste of Spain on the Camino.