San Fermin festival or festival of Saint Fermin of Amiens

Occurs every year in the city of Pamplona from the 6th to the 14th of July, the opening of the party is marked by setting off the pyrotechnic Chupinazo.  This is a loud banging rocket launch that they use to open the festival every year and is usually broadcast on television so anyone not lucky enough to be attending can also enjoy.  There are many events involved in the festival over the full nine days and the whole region of Navarra is alive with happenings.  The Spanish certainly know how to do a fiesta and San Fermin is one of their proudest achievements.

San Fermin is the local venerated Catholic saint of Pamplona and they have this festival every year in his honour.  He is said to be the son of a Roman politician from Pamplona, who became was the first bishop of Toulouse.  He was martyred in 257 AD by being tied to a bull by his feet and dragged to his death.

Many pilgrims walking the Camino in the early stages of the French Way around this time may wish to stop in Pamplona to experience the festival. Each year, thousands of people come to the city to celebrate “Las Fiestas de San Fermin“. Ernest Hemingway, the world-famous American novelist made San Fermin famous through his description of it in “The Sun Also Rises” in 1926. San Fermin is one of the most popular festivals of its kind. The festival makes Pamplona a great place to spend an extra night during your Camino de Santiago pilgrimage at any time of the year.

The Running of the Bulls

If Camino pilgrims are fortunate enough to pass through Pamplona between July 7th and July 14th, they may be able to attend the Running of the Bulls. This is an internationally famous festival in Pamplona, which many try to recreate elsewhere (imitation is the sincerest form of flattery). It is said to be a one-of-a-kind of experience, the memory of which will stay with you forever. It usually involves between 1,600 to 3,600 participants who race voluntarily in front of a herd of running bulls. People who are unwilling to participate can watch from various locations throughout San Fermin cheering on friends or other participants. The running starts at 8 am, but those wishing to run should arrive at 7 o’clock to be ready. Spectators must also show up early because the event is very crowded and good viewing areas will be taken up early in the morning. The bulls run 826 meters (0.5 miles) and the entire race usually takes 3 to 4 minutes, depending if you are a runner or a spectator they may be the longest or the shortest 3 to 4 minutes of your life!

Participants are warned before they run that there is, of course, potential danger and many runners have been hurt and in fact, even killed. There has been 15 bull running related deaths since 1904. Injuries can be sustained by pile-ups of runners as well as by the bulls themselves. In which case, when choosing to participate, safety and awareness are critical. The San Fermin festival continues for the full day after the Bull Run has finished. There’s a very friendly and vibrant atmosphere around the whole region that will be difficult for any pilgrim walking the Camino to avoid. The traditional attire for the festival is available to buy in the city and is a great addition to get you into the spirit of the event, but it isn’t a requirement. It is highly recommended to dress up and play along as it will add to this authentic, once in a lifetime experience but if this isn’t your thing – don’t read too much into it. The outfit consists of white trousers, a white shirt, a red scarf and a red waistband.

You can also book tickets in advance to watch a bullfight at 6 pm in the arena. If you happen to be walking the Camino around these dates, we highly recommend you try your best to spend at least one extra night – ideally more – enjoying the Fiestas de San Fermin and the Running of the Bulls.

If running bulls aren’t your thing then there are many other events happening throughout the San Fermin festival including:

The main day of the festival is 7 July, when thousands of people march through the old part of Pamplona with a 15th-century statue of Saint Fermin. The statue is marched with through the streets with dancers, performers and different political and religious authorities including the city mayor. During parade a Jota, an ancient traditional dance is performed for the venerated saint. Enormous wood-framed and paper-mâché puppet figures dance and twirl while the cathedral bell named María sounds. 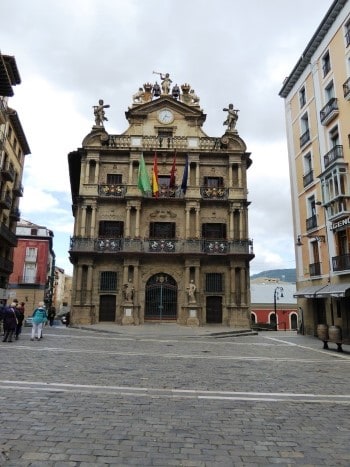 El Struendo or The Roar is a one-day event with more than 50 years of tradition. People gather at precisely 11:59 pm at the Town Hall and make as much noise as possible for several hours mainly with drums but also bowls, whistles or any other objects. This isn’t one for the faint-hearted and has even been left out of the official program on occasion, although it always still goes ahead.

Exhibitions and competitions of traditional Basque rural sports are held every morning in the “Plaza de los Fueros”, a square close to the city. Sports include stone lifting, wood cutting, or hay bale lifting. On the other hand, the Jai alai tournament of San Fermin is a prestigious competition of this variety of Basque pelota. It is held in one of the courts of the city. Betting is common during these events, so make sure you ask the locals for a few tips. 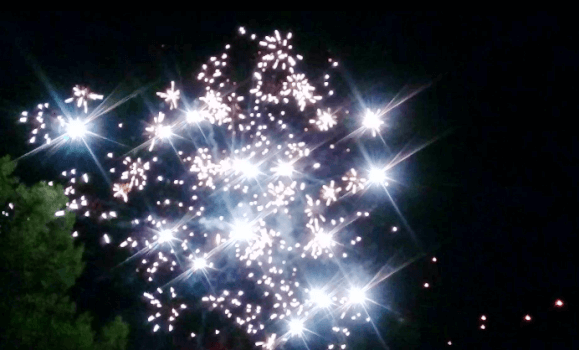 Every night a firework spectacle is held at the citadel park. Pyrotechnic spectacles have been known to occur in San Fermin as far back as 1595, so it’s a tradition deeply ingrained in this region. Since the year 2000, an international fireworks contest is held annually. Thousands of people watch them seated on the grass and soaking in the atmosphere around the city centre.

There is plenty more information on both San Fermin and the running of the bulls on sanfermin.com.

Thinking of stopping by before heading on you Camino route? Talk to our Camino experts today.