Starting From
€712
Jan
Feb
Mar
Apr
May
Jun
Jul
Aug
Sep
Oct
Nov
Dec
Popular Time
Good Time
Off Season
Not Possible
This route has a mixture of coastal, countryside and hills finishing with a wonderful view over the city of Bilbao.

This first section of the Camino del Norte takes you from the city of San Sebastian to the city of Bilbao.  San Sabastian makes a wonderful starting point for the Camino del Norte. Located on the Bay of Biscay in the mountainous Basque Country, San Sebastian is known for its beaches and waterfront promenade.  Here you can enjoy world-renowned cuisine as well as the more informal dining experience of Pinxto’s and wine pairings.

San Sebastian is a great place to start your Camino. From the rolling green hillsides that surround the city to the golden beaches that frame the coastline you can experience, city life, beach life and country life all within a short distance of each other. Elegant architecture sits well alongside the reputation San Sebastian is gaining world wide as a destination for a wonderful culinary experience.

Deba is your last coastal town for the next few days until you reach Bilbao. This quaint seaside town traditionally relied on whaling and trade via the sea but nowadays it focuses on its tourism offering. Here you will find the National Monument of the Church of Santa Maria, one of the finest churches in the region. From the 16th century this church is a prime example of the Basque Gothic style.

Rich in Basque heritage many will know the name of this town from the famous painting by Pablo Picasso. The town was almost completely destroyed in 1937 when it was bombed bu Italian and German forces support General Franco. The town however in true Basque fashion didn’t let this be its end, with the survival of the Biscayan Assembly and the Guernica Tree the town rebuilt itself. Here you can learn more about the Basque culture and how it is preserved today. Every Monday there is a market held that is one of the best in the Basque so if you are here on Monday be sure to peruse the market for some local treats.

Once you arrive you’ll be booked into a hotel in the heart of the town. The rooms are en-suite.

Leaving San Sebastian and the unspoiled Bay of Biscay, this route curves along the coastline through grassy fields and rolling hills. First, you’ll see the Church of San Martin de Tours, a lovingly resorted national monument, before passing through some traditional whaling towns. Later, you arrive in the picturesque village of Getaria, perched on a rocky headland above a cute harbour.

For Day 3 you’ll set out on a small country road hugging the coast, eventually arriving in Zarautz. From there, take the small footpath into farmlands until you reach the Church of Santa Maria la Real and birthplace of explorer Juan Sebastian Elcano, the first man to circumnavigate the earth back in the 16th Century. Once you’ve stopped to admire the town, continue along the coast to the last stop – the stunning beach town, Deba.

Today, we leave the sea behind for more mountainous landscapes and won’t see the coast again until Bilbao. The route crosses a river and starts climbing into dense scrub, until it reaches the Hermitage of El Calvario. From here, keep to the narrow footpath (GR-121), which passes through many hamlets. Finally, the trail descends steeply into Markina, a village with strong Basque traditions.

Leaving Markina, the route follows an ancient cobbled road and crosses the river in Bolivar (28 km). It ascends to the 15th Century Monastery of Cenarruza, which contains a Gothic Renaissance church and medieval cloister. Leaving the monastic site, the path moves into dense woodland, up to Gontzegarai, and down to Gerikaitz. At the Hermitage of Santiago, a steep footpath leads downhill to a creek and finally to Gernika.

Setting out this morning you’ll leave Gernika by the hermitage of Santa Luzia Zallo. Shortly after, we’ll reach the road (PR-173) that will take us to Morga. Here, we leave the farmland and enter a forest, following a steep descent to the traditional villages of Goikoletxea, Larrabetzu, and finally, Lezama.

This is a relatively short stage through pastoral farmland. First, we pass Zamudio and the Roman Church of San Maarten, where the Tower of Malpica is visible above. Slowly climbing to reach the summit of Mount Avril, we’re rewarded with spectacular views of Bilbao and the valley below. On arrival in the suburbs of Bilbao, don’t forget to visit the beautiful Basilica of Our Lady of Bego, as well as Place de Unamuno, in the old quarter of Bilbao.

After breakfast we bid you farewell. 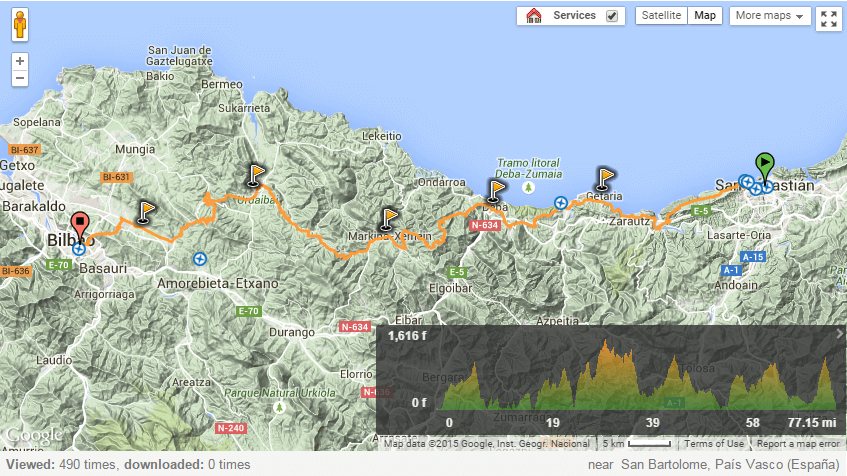