This specific route is the starting point of the Camino Frances. It begins in France at St-Jean-Pied-de-Port and finishes in Pamplona, the town famous for its Running of the Bulls festival in San Fermin, described by Ernest Hemingway in his novel The Sun Also Rises. At first, it follows the Route de Napoleon over the Roncesvalles Pass (1500m) in the Basque country, and then crosses into more gentle terrain in the great region of Navarra.

Your first stop on the Camino Frances is the quaint French town of Saint-Jean-Pied-de-Port – the traditional starting point of the Camino Frances. Before you set off through the Pyrenees, explore this scenic gem and soak in the excitement of the town as pilgrims flock to start their pilgrimage.

Here you will find the beloved Royal Monastery of Santa Maria de Roncesvalles, which has been receiving pilgrims since the 12th Century. It is here also in Roncesvalles you will see a monument commemorating the defeat of Charlemagne’s army and their commander Roland at the battle of Roncesvalles in 778.

The city famous for it’s running bulls! Once you arrive in one of Spain’s most famous and historical cities, take in the gothic-style architecture and walk through the streets that inspired Hemingway’s ‘The Sun Also Rises’. From Medieval city walls to impressive La Catedral de Santa María la Real de Pamplona.  You can easily spend time wandering the streets and working up an appetite to enjoy either a traditional Basque influenced dish or a more modern fusion style dish, Pamplona has it all!

You’ll be booked into a hotel in the heart of the small town. The rooms are en-suite.

This first day is considered the most difficult as the Camino crosses the Pyrenees. The ‘Camino Napoleon’ kicks off with a steep climb, on through orchards and past country houses and then, later, through Alpine-style meadows, before weaving its way alongside leafy beech woods towards the Spanish border and the descent into Roncesvalles. The Valcarlos Camino mainly follows the road which runs through the valley alongside the River Nive or River Valcarlos. Don’t miss the Collegiate Church in Roncesvalles. NOTE: If you would like to walk at a more relaxed pace, we can arrange an alternative route (though not as rewarding) that splits this walking day into two stages (12km and 14km), staying overnight in the village of Valcarlos. Here you will be staying in a two-star hotel. This is route through Valcarols is no the usual Camino itinerary and the walk is not as rewarding as it follows the main road. IMPORTANT: The Napoleon Route over the Pyrenees is closed for Pilgrims from the 1st November until the 31st March. Pilgrims need to use the alternative route via Valcarlos if they are travelling within these dates. Travelling on the Napoleon Route at this time is forbidden and all pilgrims going over the Pyrenees and having to be rescued before that time will be fined €5,000.

The Camino crosses two beautiful mountain passes and continues on through beech and oak woods and meadows before coming to Espinal, where the panoramic views of the countryside, with the Pyrenees in the background, are a sight to behold. The River Arga runs alongside this part of the Camino and continues its course all the way to Larrasoana.

The Camino runs along the River Arga, at the foot of a group of hills covered in beech, oak and Scots pine. As we approach Pamplona, the landscape shows more signs of civilisation, with its reforested conifers and farmlands. 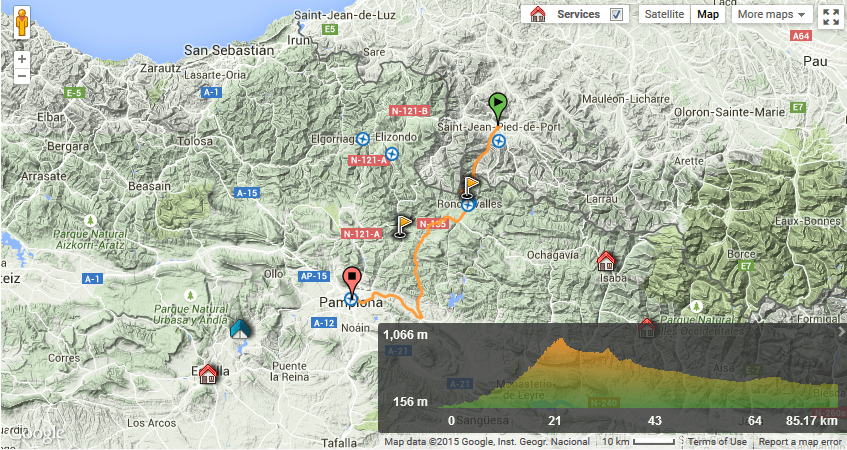