Camino Portugues from Santarem to Coimbra

Starting From
€709
Jan
Feb
Mar
Apr
May
Jun
Jul
Aug
Sep
Oct
Nov
Dec
Popular Time
Good Time
Off Season
Not Possible
Starting out relatively flat this route soon gets hilly as you make your way up to Alvaiazere then back down to Coimbra.

This 2nd section of the Portuguese Way stretches between Santarem and Coimbra, through the province of Ribatejo, the only one in the whole of Portugal that does not border either the Atlantic Coast nor Spain. So this walking holiday explores the heart of Portugal, a region of traditions and with cities full of history such as Santarem, Tomar or Coimbre. This part of the Camino Portugues is yet to be discovered!

Due to the location of the town between the Tagus River and its tributary River Almonda, it is a prime position for a town with a focus on agriculture. Granted to the Order of Templar for farming purposes in the 12th century cemented the towns position. With agriculture being a large part of the economic makeup of the town it is not surprising then to hear that it is here where the National Horse Fair takes place every year in November. From the 12th century there has also been efforts to welcome pilgrims and continues to this day. When in town be sure to visit the Igreja Matriz da Golegã in the main square with its exquisite Manueline door, simple interior and wonderful tiled surround of the altar.

The medieval centre of Tomar is an attractive space to relax in after a days walk on the Camino. However you must garner the energy to go up and visit the Templar Castle, Convento de Cristo. A World Heritage Site you can witness up close the influences of Gothic, Manueline and Renaissance architecture, all telling their part in the history of Portugal from its founding through to the Age of Discovery. Henry the Navigator was appointed a Grand Master of the Military Order of Christ which sat in Tomar and held this position for the remainder of his life, thus demonstrating the importance of the Order of Christ in Portuguese history.

Built in 1648 to replace the old medieval convent that was affected by flooding. The founder of the ancient abbey was Queen Isabel, who was canonised in the 17th Century. Her remains where moved in a great procession from the old convent up to the new one and placed in a silver tomb in the high alter. With the death of the last nun in 1891, for a while the convent was maintained as a missionary college until 1910 when it was taken over by the Army. The monastery however was returned to the Brotherhood of the Confraternity of Queen Santa Isabel in 2006. Open daily be sure to visit this beautiful resting place of Queen Isabel.

The city of Santarem is perched on top of a hill, overlooking the Rio Tejo valley. Santarem is a small, charming historic city where visitors can wander around the winding streets and enjoy the relaxing Portuguese way of life.

Leaving Santarem, we soon find ourselves walking along quiet country lanes as today the Camino heads North East, mostly following Rio Tejo. It passes through very few yet charming villages, a land of campinos (cattle herders), horses and bulls (as the region is famous for bullfighting). This is a long walking day but the flat terrain makes it easy enough to complete.

We start this day heading towards one of the country’s nicest manor house, Finca da Cardiga. Then we continue through the quiet hilly countryside, passing through a few scattered villages. The day finishes on Praza de la Republica in Tomar, in the heart of the old city.

Today announces a change of terrain as we go up and down along several wooded valleys, Roman roads, and farm tracks. This day is often seen as challenging but it is also one of the most rewarding of this section.

Leaving Alvaiazere, we start with a steep climb up followed by a steady descent. The Camino continues up and down through crop fields and olive groves and along the medieval route that brings us to Ansiao.

We leave Ansiao crossing a 17th century bridge Ponte da Cal and heading towards Netos. Then the landscape alternates between pine and eucalyptus woods, olive groves and small towns. We finally make our way to Condeixa a Nova.

CONDEIXA A NOVA
to
COIMBRA

The first half of the day runs through the countryside with lovely vineyards, olive groves and woodlands. As we approach the University City of Coimbra, the area becomes more populated and the last climb up of this section is towards alto de Cruz de Mourocos (Alt. 190m) overlooking Coimbra and the Rio Mondego valley. Coimbra is a bustling, lively city, home of one of the oldest university in Europe! 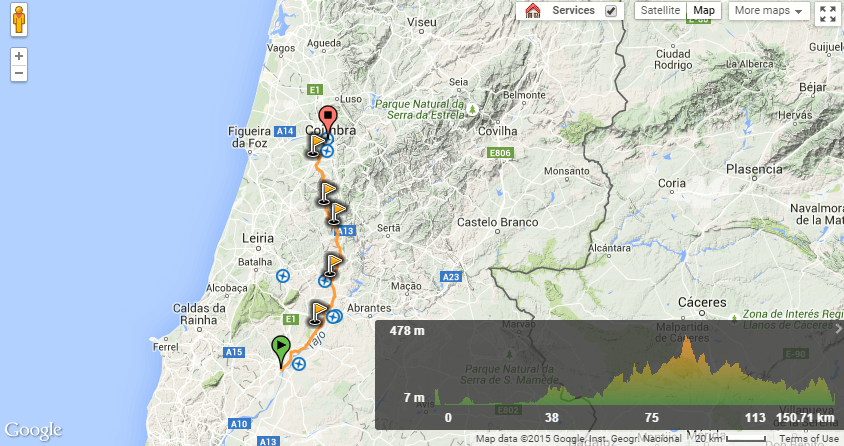