As most of you are well aware, Camino can be a long and challenging journey. Some walk it for weeks. But do not be alarmed as help is always near. Getting lost is pretty near impossible and one of your companions together with your map will be the yellow arrows leading the way which is the topic of discussing today.

Yellow road signs with a scallop shell can be seen along every Camino routes.One might wonder what they represent as they walk pass them. We will talk about the scallop shell in a different post.

The Camino Francés in Spain is particularly well signed all throughout the way with yellow arrows. Some are just flippantly painted on walls whilst others are carefully designed and manufactured actual sign posts. Either way you’ll always see them at crossroads all along the Camino so it’s very easy to navigate the route. Though it actually gets a little more tricky once you enter big towns or cities as these yellow arrows can get lost amongst the clutter of the city. But fear not, this isn’t a reason to worry as if you do appear lost one of the locals will, in no time, point you in the right direction. Locals are friendly and well used to seeing pilgrims. Some cafes and hotels even promote themselves and support the Camino by giving stamps on pilgrims’ passports as well.

The history of the yellow arrows is an interesting one – one that isn’t as old of a story as you may think it is, They are said to be the bright idea of a dedicated parish priest named Don Elias Valina Sampedro of O Cebreiro – he was a priest and scholar who devoted more than thirty years of his life to the study, resurgence and promotion of the Camino de Santiago.

In 1959, at just thirty years of age, D. Elias was appointed priest of the Parish of Santa Maria La Real of O Cebreiro. Under his directions, the Church of St Mary’s as well as the ancient inn and pilgrim hospital which he described as being “little more than a dunghill” – were restored and in 1972 O Cebreiro was declared a Historical Monument.

The reanimation of the Camino was a very sacred and important job to be carried out to him so he took it upon himself and threw himself in to the role of promoting and resurrecting the Camino. In simple words, he took a brush and yellow paint and started drawing arrows. Back when the Camino was not well known, some routes were impassable so he had to talk and convince town mayers and got them involved in the work. Imagine you live in a coast of France, one day you left home to walk the Camino and it took you months or more to reach your destination. With no experts or specific road map or sign to help, if only there were such arrows drawn everywhere to help you. Now, we have many different signs and helps along your way. However, without him, the Camino might not have been what it is today.

The reason for the choice of colour, yellow, is for one, it is for visibility and two, it was a common colour for hiking trails and lastly, it was a readily available paint. While he was painting the arrows, he was stopped by the policemen. When he was asked what he was doing, he answered, “Preparing an invasion from France”. He had to be taken to the police and explain his actions. His persistent nature must have inspired many and indeed moved them to get involved. Today thousands of pilgrims walk the Camino, following the yellow arrows and shells. 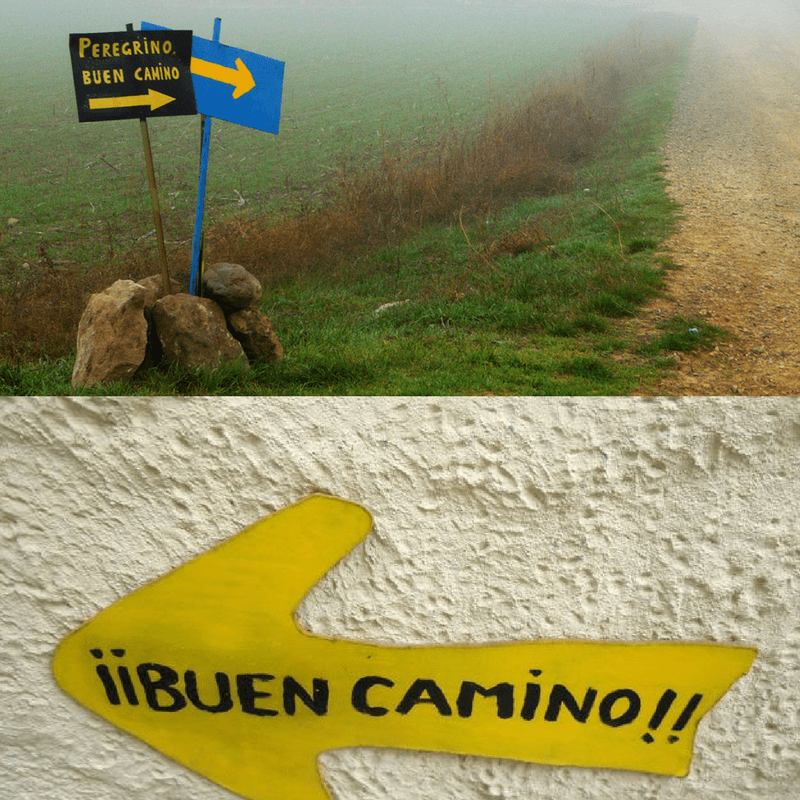 In 1967, D Elias wrote his doctoral thesis named, The Road of St James: A Historical and Legal Study it is an exhaustive description of all the monuments and items that could have any value and is six large volumes!

“In the 1970’s there survived only a remote memory of the Jacobean pilgrimage” he wrote. In 1971 he wrote the book ‘Caminos a Compostela’.

In 1974, Edwin Mullins published a book “The Pilgrimage to Santiago”. In it he recounts how it was for a pilgrim on foot in the early 1970’s:

“It was more often a question of dropping into village bars and enquiring politely where the old road might be.”

In 1972, only 6 pilgrims were awarded the Compostela.

D. Elias’s guide was published in 1982 and at a gathering in Santiago in 1985 he was entrusted with the co-ordination of all the resources for the Camino. Pilgrim albergues were then established and he was the very first to mark the way with yellow arrows with paint that he begged from the roads department.

Ten years later, in 1986, the Santiago Cathedral issued 2,491 certificates. In 1989, the year of the Pope’s visit (and sadly, also the year D Elias passed away) 5,760 compostelas were issued. If you are one of the estimated 600,000 pilgrims to trustingly follow the yellow arrows this year, remember the generous hand of D Elias who lovingly painted them. You can see a bust of D. Elias – and a number of dedication plaques – in the churchyard.

The priest who was once even called “mad” is now respected by many. He passed away at 60 years of age in 1989. His grave is at the Basillica of Santa MariaReal in O Cebreiro. A statue stands outside this temple in his honour and dedication. To this day, following his step, many take up the yellow paint brush to mark the way to Santiago where the end of the world is.

Aside from road signs and locals, there are plenty of services we at Follow The Camino offer. If you want to find out more about the Way, contact our experts.

Share your Camino memories by using #FollowTheCamino for a chance to be featured.