Melide on the Camino de Santiago

The Meeting Point of the Camino Primitivo and Camino Frances 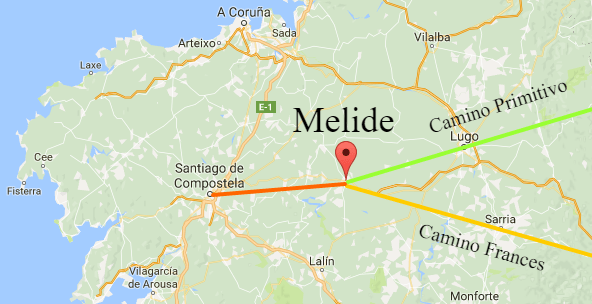 Melide, located in the region of Galicia in northwest Spain, is the only town where two Camino routes meet.  The Camino Primitivo (Original Way) stops in Melide and the Camino Frances (French Way) passes through.

This town is well equipped and accustomed to helping pilgrims. After all, the Primitivo is the oldest route and the French is the busiest!

The northwest region of Spain has been inhabited since the Neolithic period.  Melide itself began to grow and become important after the discovery of the tomb of Saint James.

From the 10th Century, Melide grew as the popularity of the Camino de Santiago did. With the increasing number of pilgrims on both the Primitivo and French routes, traders and innkeepers began to set up along these routes.

In the early 14th Century, the Archbishop of Santiago, Berenguel de Landoira stayed in Melide on his way to Santiago to take up his Bishopric.  To thank the village for their hospitality, he granted them permission to build a fortress and charge taxes.

In the 15th Century, Melide played a central role in the Irmandiña Revolts against the power of the local barons.  It was during these revolts that the walls of the town and the fortress were destroyed.  The stone however was later used in the construction of the Convent of Sancti Spiritus.

In the 19th Century, Melide played its role in the fight against Napoleon’s troops during the War of Independence.  Despite being outnumbered by the French the troops managed to push the French into a retreat.  Less than half of the fighters had firearms, but they were assisted by villagers wielding rudimentary tools and sharpened sticks.

Despite many people leaving the town since the 1950’s Melide is still going strong.  Today, tourism from the Camino plays a major role in the economy of the town, alongside more traditional agricultural activities.

Things to Do in Melide

Although not a large town, Melide has plenty to offer pilgrims on the Camino. It is worth starting your walk early on the day that you will arrive at Melide so you have time to explore.

You can also add another night here to discover the surrounds. Find a coffee shop, settle down, and watch the flow of pilgrims coming in from the two Camino routes. If you are staying the night then you will have ample time before you leave to explore this town.

From the Camino Frances, you will pass through the village of Furelos and cross its medieval bridge just before entering Melide.  This quaint bridge is an architectural jewel on the Way of St James.

Take some time to discover the impressive architecture of the Chapels in Melide, as well as the numerous monuments.

Saint Roque Chapel, although only built in 1949, has the facade of the medieval St Peter’s church. It is one of the most beautiful examples of Galician Medieval art.  Next to the chapel is the oldest transept in Galicia, dating from the 14th century.  Close by is the Fuente de los Cuatro Caños (Source of the four pipes), an iconic fountain in Melide.

At the Praza do Convento you will find the Sancti Spiritus Church and St Anthony’s Chapel, which the Town Hall is attached to.  Just off the square is the Terra de Melide Museum. 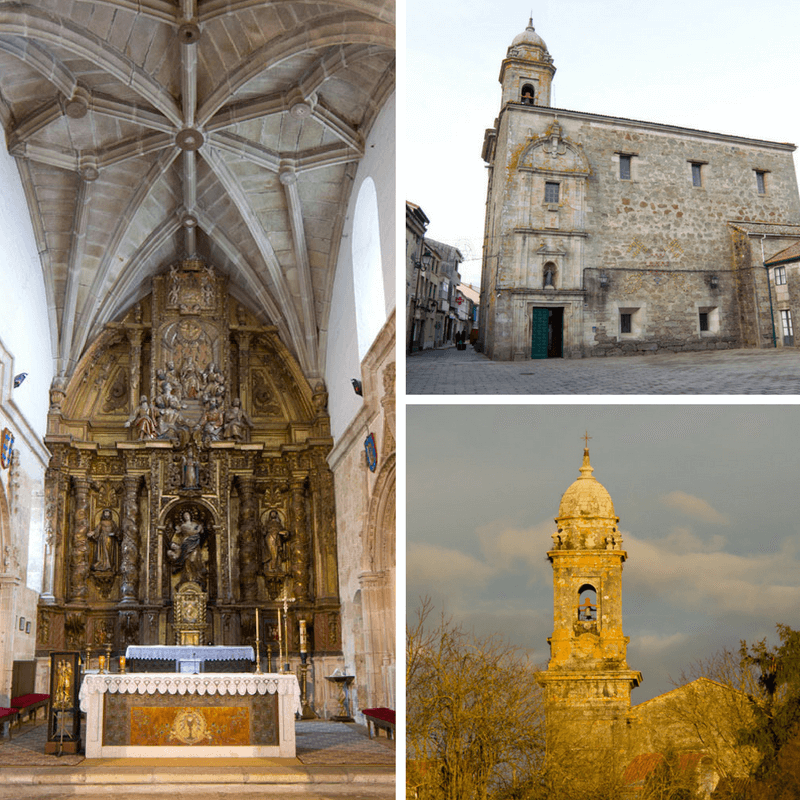 The Sancti Spiritus Church stands on the ground of the monastery or convent of the Third Order of Saint Francis which was established here in the 14th Century.

What makes this building interesting is that the additions over the centuries are obvious but add charm to the Church.  The church was initially rebuilt in the 15th Century using stone from the destroyed walls of the town.

During the 18th Century, the church was extended and the main facade was added.  The tower of the Church was also added at this time and is similar in style to the towers on the Church at the Convent of San Francisco in Santiago de Compostela.

Inside the church you will find wonderful examples of  Baroque and Neoclassical style sculptures. 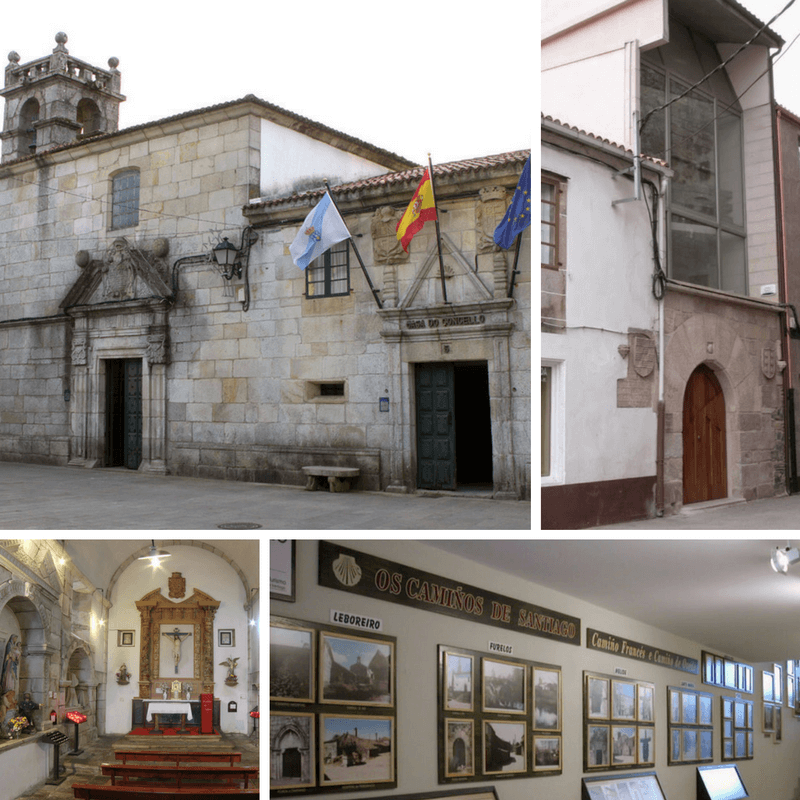 St Anthony’s Chapel was built in 1671 and is attached to a Baroque country house. This has been the Town Hall since 1960.

If you still have some time on your hands, another great place to visit is the Terra de Melide Museum. It was built in 1978 on the grounds of an old pilgrim hospital. The museum has 8 floors and one floor has a section dedicated to the Camino de Santiago.

When leaving Melide you will pass the site of O Castelo and the Chapel of the Virgin of Carmen.  Although the castle is no longer there, it offers a wonderful panoramic view back over Melide and the Camino.  This is also a wonderful spot to come at night for the view.

Like most Spanish towns, festivals make up a big part of the calendar of activities throughout the year in Melide. 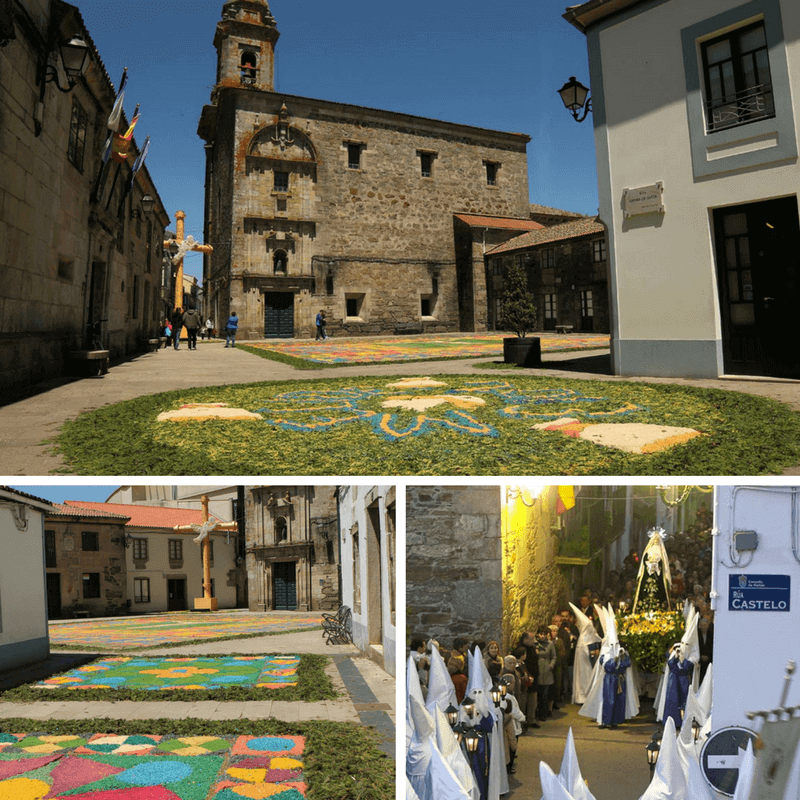 If you are in Melide over Easter you may be lucky enough to witness the processions of the Virgin of Solitude or the one on Good Friday.

During June and the celebration of Corpus Christi, the Convent Square is laid out with carpets of flowers that are a wondrous sight to behold.

Other feast days celebrated in Melide are San Antonio on the 13th June; San Pedro the patron saint of Melide on the 29th June and Carmen on the 16th and 17th July.

Undoubtedly the largest festival is the celebration of San Roque.  This festival lasts for one week from the 15th of August.  During this week you can attend a Medieval Pilgrim Market alongside a wide range of musical performances and cultural programmes.  During this festival, the population of Melide triples creating a lively atmosphere to arrive into when walking the Camino.

Food plays a major role in Melide.  Here they pride themselves on high-quality raw produce and good cooks. Every Sunday there is a fruit and cheese market.  We would recommend that you get into Melide early if you are arriving on a Sunday. Take some time to purchase wonderful fresh produce or sample some of the local cheese, preserves or spicy sausages. 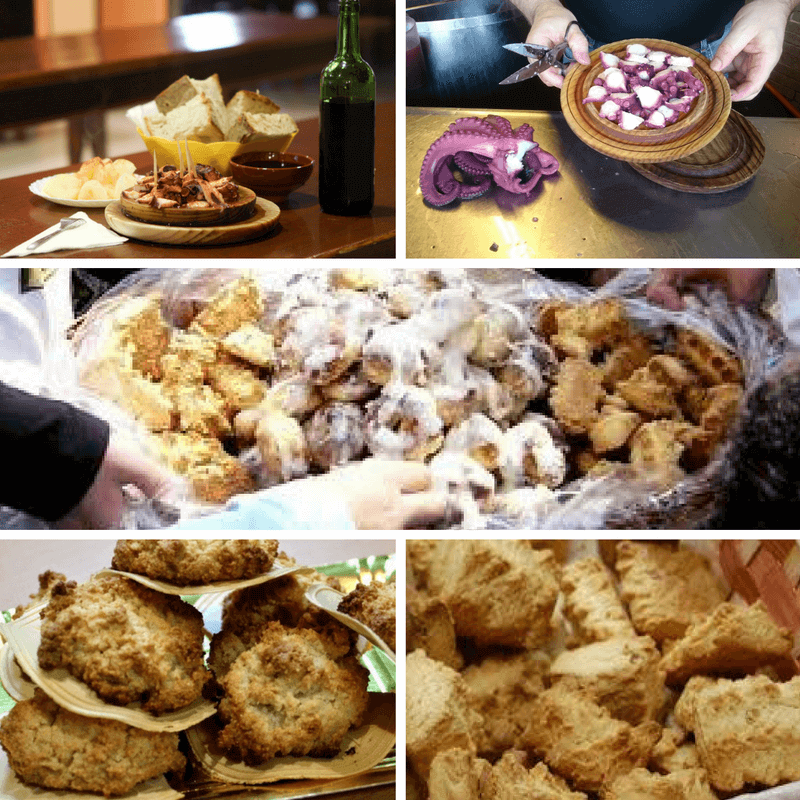 Despite being inland, Melide’s best dish and one you must try when here is ‘Pulpo á Feira’, boiled octopus.  To enjoy this dish like a local it should be accompanied with bread, cachelos (boiled potatoes) and red wine.

Make sure to plan your walk on the Camino to arrive here in time for lunch!

For those with a sweet tooth, Melide is a taste of heaven. The smell of fresh baked goods will welcome you to the centre of town. Make sure to leave space to try some of the freshly prepared pastries!

If you are fortunate enough to reach Melide on the second Sunday of May you will be in for a treat. That is the day of the Sweet-Cake and Traditional Pastry-Making Festival – a day devoted to traditional pastries made in Melide.  Needless to say, it will be a mouth-watering affair.

If you are interested in walking the Camino Primitivo or Camino Frances so you can pass through or stay in Melide then get in touch with our Camino Planners who will be more than happy to help!

We can answer all your questions, give you plenty of tips on when and where to go, and look after all your bookings for you.

See you on the Camino soon!


Solo, with friends, with family or as part of a guided group – Let us help to create your dream trip!