Camino Talks with Frank Flanagan - Start your Camino on the Boyne Valley Camino! | Follow the Camino 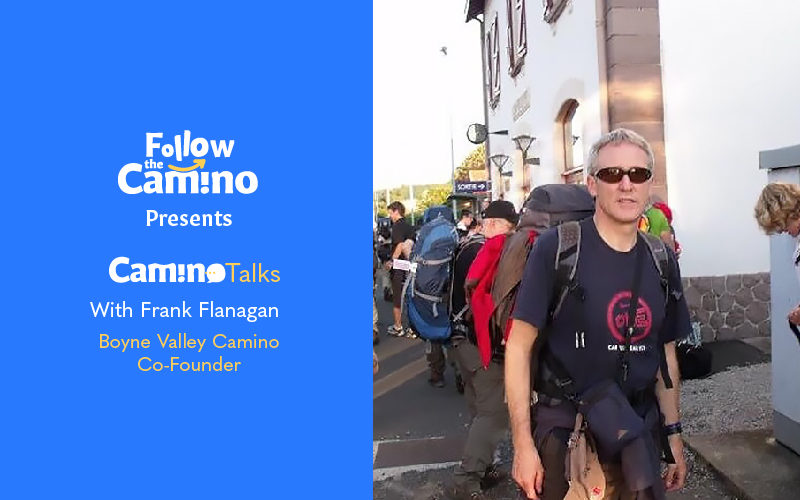 The Boyne Valley Camino is a pilgrim route that connects Ireland to the Camino Inglés in northern Spain.

This 25km route from Drogheda to Mellifont Abbey forms part of the Celtic Camino. Consisting of a series of pilgrim paths, the Celtic Camino can be combined with the 75km Camino Ingles from A Coruna to Santiago de Compostela, in Spain.

By walking a certified Celtic Camino route and then the Camino Inglés from A Coruna, people can accomplish the 100km necessary to obtain their Compostela certificate at the Pilgrim’s Office in Santiago.

We had the opportunity to interview one of the founders of the Boyne Valley Camino, Frank Flanagan. He shared very interesting insights about this Celtic route with us.

How did the idea of creating the Boyne Valley Camino arise?

Since 2014, Drogheda has hosted a walking festival which brings a lot of visitors to the town. They can appreciate how lovely it is there, the historical sites, the forest, and the Greenway.

When the Boyne Valley Camino founders found out about the work that the Camino Society of Ireland was doing to designate new pilgrim routes in Ireland, they spotted that as an opportunity.

They created a permanent 25km route that connects Drogheda to the Boyne Valley. Then, they put that proposition to the Camino Society.

In the meantime, the book “Medieval Irish pilgrims to Santiago de Compostela” by Dr Bernadette Cunningham came out. This book features Drogheda as an original starting point for Irish people going to Spain from the port of Drogheda.

“So everything fitted in, it just all came together and you know, so we have the historical elements we then had the approval from the Camino Society, and we had the launch of the Celtic Camino Boyne Valley in June 2019,” says Frank.

How long did it take to develop this Celtic Camino?

It only took about seven months to put together. They used existing trails and the Coillte forest, which was already there. They also used minor roads and got great assistance from the OPW and local businesses to develop the passport stamps and the stops along the way.

What are the main highlights of this walk?

This Celtic Camino offers a great mixture of history, forests and green areas.

It starts at St. Peter’s Church that houses the head of St. Oliver Plunkett. Then it follows the north side of the river until getting to a forest called Townley Hall, which is adjacent to the bottom of the Boyne.

So people can make a detour to explore Old Bridge house. Then, the route goes on to Mellifont Abbey, which was the fourth Cistercian monastery in Ireland. It has great historical relevance to Ireland because it was also the place where the Treaty of Mellifont was signed, and that relates to the flight of the Earls and the colleges that were set up in Spain then.

The way then goes through the village of Tullyallen and the lovely Coillte forests. A particularly nice piece of that forest is King Billy’s Glen, which has just been recently developed as a walk through the forest.

The Boyne Valley Camino then crosses the Obelisk Bridge and goes back on the south side of the river which connects to the Greenway. And from there, you can enjoy a fantastic view of the historic town of Drogheda in the distance.

Have you been on the Camino?

Frank has been on the Camino several times. The most unforgettable one was with his brother and a friend. They decided to embark on the Camino journey to celebrate his brother’s 50th birthday.

He said that “It was a very special occasion that made us feel closer than ever, as when we were younger”.

They first walked the popular last 100km from Sarria to Santiago de Compostela where they could get a taste of the Camino. After some time, they decided to come back to walk the full Camino Frances from St Jean Pied to Santiago.

After the Boyne Valley Camino was set up, Frank went back on the Camino. This time he visited A Coruna to meet the mayor of the city. He was very happy to see that the tourist information centre already had Drogheda noted as a place of connection with the Camino Inglés.

How to walk the Boyne Valley Camino

Everyone is welcome to walk the Boyne Valley Camino at any time. You can choose to do it on your own or join one of the Celtic Camino training sessions that Follow the Camino organises every year.

You just need to download the map of the route and get a pilgrim passport to be able to collect the stamps along the Boyne Valley Camino. If you are walking on your own, you can get your passport from the Camino Society of Ireland.

Put on a pair of comfortable walking shoes, pack sun cream, your sunglasses, some snacks, plenty of water and rain gear (just in case… it is Ireland after all!), and you’ll be ready to start your Celtic Camino from Drogheda to Santiago!

After finishing your Celtic Camino in Ireland, we then can help you plan your Camino Ingles from A Coruna. We provide anything you may need for your trip from the accommodation, luggage transfer, meals to any day tours that you’d like to experience along the way.