Home > Blog > The Camino on Horseback

The Camino means different things to different people. For some it’s a pilgrimage, a spiritual journey, a chance to get away from the mayhem of modern living and reconnect with yourself.  For others it is a sociable journey, an historical tour or active holiday.  Most people either walk or cycle the Camino both of which have their own draw.  However, for the more intrepid traveller who is looking a memorable holiday it is possible to do the Camino de Santiago on horseback! 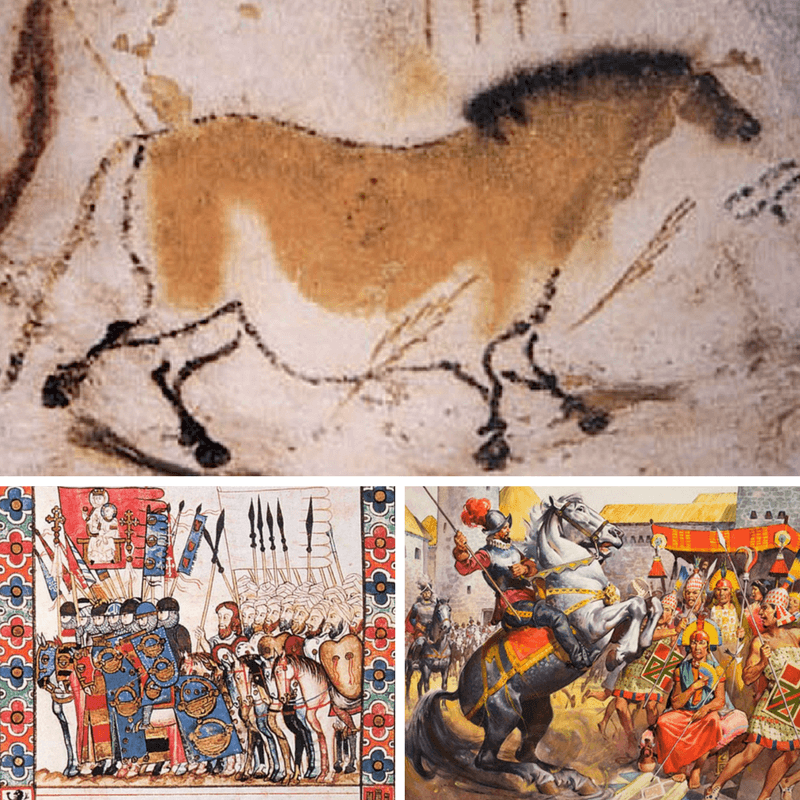 Horses have been associated with the Iberian Peninsula for centuries.  Paleolithic drawings of horses even exist in the Alta Mira Caves up on the north west coast.  It is unknown if these horses were domesticated or just used for meat.  As far back as the Celtic and then Roman period horses played an important role in both a military and domestic capacity.  The blood line of the native horses of the Iberian Peninsula however where greatly affected by the Moorish Invasion.  The Arabs brought with them their lighter Arabian horses which over time they began to breed with the stockier Iberian horses.  The result of this breeding over centuries established the Andalusian breed.  These horses are renowned for their power, elegance and athleticism all which contributed to make them excellent military horses.  During the many wars over the centuries in Spain horses played a strategic role in many of the battles particularly during the Reconquista.  After the Reconquista horses also played an important role in Spain conquering much of South America.  The natives had never come up against a cavalry charge before and so the Spanish easily and quickly defeated the Incas and Aztecs to carve out a huge empire.

The horses of the Iberian Peninsula also have connections with the Camino.  Legends associated with St James feature horses.  There are two connected and possibly alternative retellings of one, where a knight or bridegroom was on horseback and ended up in the sea in difficulty.  At the exact time the remains of St James was passing by and the Saint intervened to miraculously bring the horse and rider out of the water to safety.  The horse is said to have been covered in Scallop Shells, which is a symbol of St James.  A popular depiction of Saint James also sees him riding atop a white steed into battle during the Reconquista.  King Alphonse II, who is said to have made the first pilgrimage to visit the remains of St James, did so on horseback.

With horses being so much a part of the history of this land and the people what better place to enjoy a horse riding holiday through the unspoilt countryside of northern Spain.  For the horse riding enthusiast we have a trip Horse Ride the Camino Frances which will take you from O’Cebreiro in the province of Lugo to Santiago de Compostela. Riding over rolling grassy hills, through leafy woodlands and small towns and villages you can feel at one with nature and your horse whilst appreciating the elevated view that a horse provides.

To give you a taste of what to expect on a horseback trek on the Camino, read on… 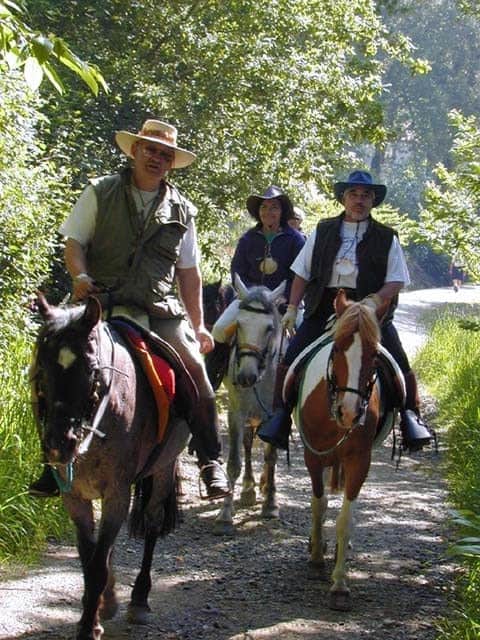 This week long trek will see you led by our experienced horse guide Rafael on his trusty steed.  Your first night will be spent in O’Cebreiro.  This village has celtic roots that are still evident today.  Setting out the next morning you will trek through the Sierra de Ranadoiro passing through small rural villages like Triacastela a stop on the Camino Frances for those walking.  Mountain passes and forested paths will mix up this day as well as the opportunity to see some beautiful Romanesque Churches.  Resting for the night in Samos you can enjoy some freshly prepared food and relax in traditional style accommodation.

Your second day on horseback will be through the plains giving you a different view.  These lush plains will see you horse ride through oak forests adding an enchantment to the day and if it is very hot and sunny much appreciated shade.   The day will end in the medieval town of Portomarin where you can relax, stretch your legs with a short walk around the town and soak in the beautiful view over the valley that can be enjoyed from some of the cafes.

The valley you will have admired from Portomarin is where you will horse ride through now on your third day, the Ulla Valley.  This valley is rich in Romanesque architecture and you will have an opportunity to visit Vilar de Donas where the Knights of the Order of Santiago protected pilgrims on this very route many centuries ago.  A final push uphill today will see you arrive into Palas de Rei where you can enjoy a drink and some tapas.  Setting out the next morning you will cross the river at the Furelos bridge before reaching Melide.  Later on this day you will pass by Castaneda, where pilgrims used to deposit their limestone rocks which where then fired for the lime used to build the Cathedral of  Santiago.  Others would have picked up rocks here to increase their penance on the last stretch to Santiago.  If you have this in mind you will be getting off to walk as no horse has even had to penance!  The stopping point for tonight will be Arzua which is known for its cheeses and ham. 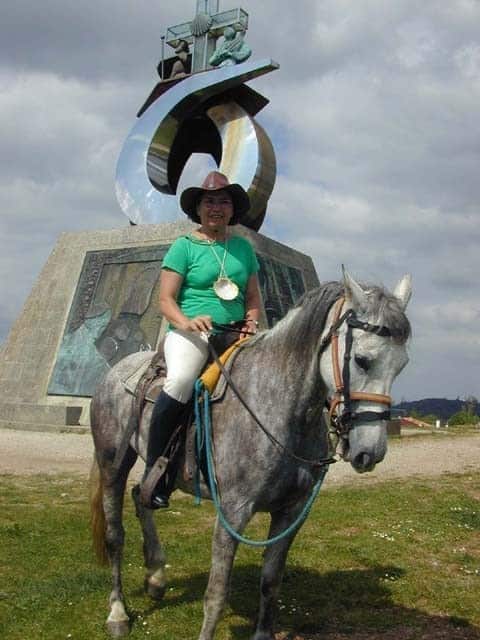 From Arzua you will do your final stretch on horseback to Santiago de Compostela as far as Labacolla.  The stretch from here then into Santiago will be on foot or you can take the support vehicle into Obradoiro Square at the Cathedral of Santiago.  Walking this last final stretch is recommended as you will get to experience the real excitement of walking alongside other pilgrims as they all head to the final destination of the Cathedral.

If this hasn’t inspired you to do the Camino de Santiago on horseback then how about something from the horse’s mouth …. 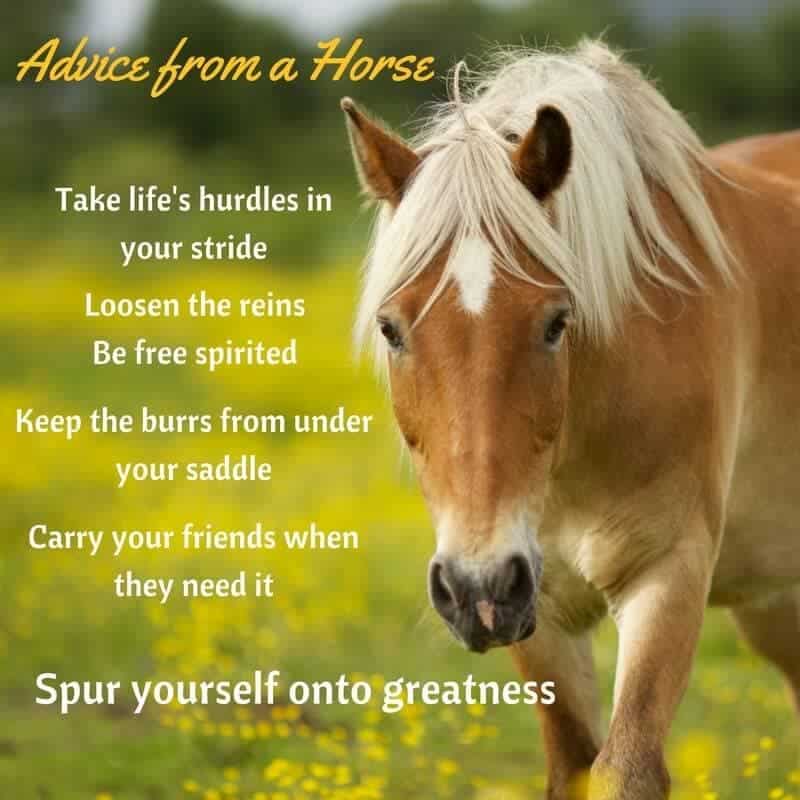 Check out our Horseback Ride of the last 150km of the French Way or click on the Contact Us button below to ask any questions or book your trip.

Do you have a walking quote or mantra for your Cam

Do you want to find out about walking or cycling t

Did you know that you can fundraise for your chari

Did you miss out on the last Camino training walk?

Discover the stunning views along the Camino del N

Find out about Cycling the Camino in our latest Ca

"We made it! It was wonderful! I would like to tha

There has been a problem with your Instagram Feed.