Pilgrimage: The Road to Santiago is a three-part documentary series on BBC2 which tracks the experiences of seven well-known celebrities taking on the famous Camino de Santiago walk. The group attempts to live like pilgrims on the Camino Frances leaving their modern-day comforts behind, staying at hostels and carrying their own luggage with the goal of questioning their faith and beliefs during the challenge. The seven pilgrims are TV presenter Debbie McGee, 90’s pop-star Heather Small, Irish comedian Ed Byrne, TV personality and priest Kate Bottley, ex-marine JJ Chalmers, BBC reporter Raphael Rowe and actor Neil Morrissey.

The group is attempting to walk part of the 800km long Camino de Santiago, starting at St Jean Pied de Port and finishing at the Cathedral of St James in Santiago de Compostela over a 15-day period (travelling part of the route by mini-bus). They spend their nights in basic hostels and even outdoors under the stars and carry their own bags along the way. Staying in hostels has proved to be one of the toughest parts for the team as they get in late and are out by 6 am most mornings, while the long days walking are spectacular but difficult for some as the physical and mental challenge is draining. During Episode 2 of Pilgrimage, we saw the crew of seven walking through the Navarre region. Neil, Kate and JJ gleefully discover the wine fountain of Bodegas Irache where they take advantage of the free wine on offer. Subsequently, the whole team reach the highest point of their Camino trek at Monte Irago where they place traditional stones of gratitude at the base of the large Iron Cross. Episode 3 is broadcast on Friday, 30th March on BBC Two and concludes the three-part series. 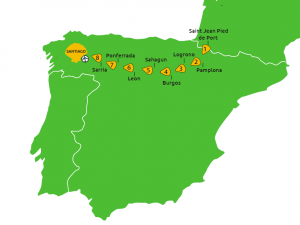 In the final episode, the seven pilgrims are now on the home straight, attempting to walk the famous Last 100km from Sarria to Santiago through Galicia. Questions of faith come to the fore during this episode as the group approaches their final destination featuring a swimming party and a debate about women’s place in the Church.

Feminism and The Church

As Reverend Kate, Heather and Debbie finish up their meal, they start to discuss the church and the role of women in it. Heather thinks women were written out of the Bible, being ‘either the Madonna or the whore’ and believes this is still reflected in life today with women being typified as ‘the good girl or the bad girl’. Reverend Kate explains that there were women priests when Christianity first came about, but slowly over time, women’s identities were suppressed and that’s why her work environment is very male-dominated. She seems disappointed and offended by the language and actions she has encountered from those who resist women holding positions of power in the Church of England.

Debbie was baptised and brought up as a Catholic, married the late Paul Daniels who was an atheist and doesn’t see herself as belonging to a particular faith. She says it’s the type of experience that Kate has described which makes her stay away from the church, but Reverend Kate argues that it’s only a small minority who are still like this. The three discuss whether it’s best to be inside the organisation and make changes within or to remain outside in protest against it.

The group meets up with Guy Hayward of the British Pilgrimage Trust who explains the meaning of what a river pilgrimage is and urges them to take a dip in the chilly river. Ed is reluctant to get in and says ‘I’m just doing something I don’t want to do, just so I can have the moan’. It’s so cold he jokes he feels like he’s just had gender reassignment surgery. Kate loves being in the water and encourages the four swimmers to dunk themselves under water in a mock, old-style water baptism ceremony. Kate comments that she’d much rather do baptism ceremonies in rivers, ponds and streams than sprinkling a dressed-up baby with water. 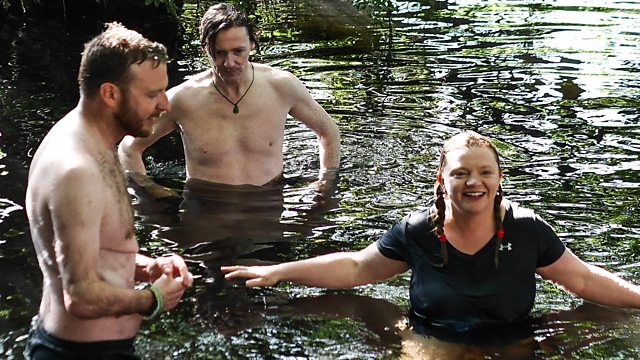 Pilgrimage is broadcast on BBC Two and also on catch-up on the BBCiPlayer. If you’d like to read more about the previous two episodes, check out our previous blog posts on Episode 1 here and Episode 2 here.