The Palace of the Kings of Navarre of Olite or Royal Palace or Castle of Olite is a courtly building with military characteristics. It was built during the 13th and 14th centuries in the town of Olite, it was one of the seats of the Court of the Kingdom of Navarre, under the reign of Charles III “the Noble”.
The castle-palace was the residence of the kings and queens of the kingdom of Navarre until its union with Castile in the 16th century. It was declared a National Monument in 1925. During the 13th-15th centuries, it underwent several transformations, although the most important developments took place at the time of King Charles III, the Noble. Visitors can tour the Old Palace today as it has been converted into a Parador Hotel. You can then continue on to the Gothic church of Santa María and the Romanesque church of San Pedro, with its cloister and Gothic tower crowned by a spire. 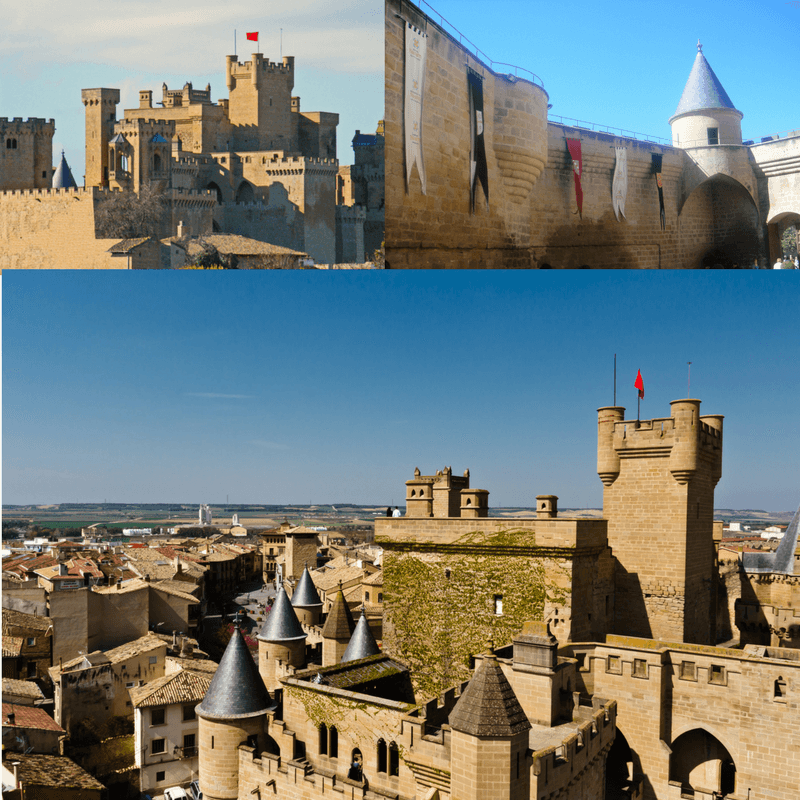 It was Charles III of Navarre who in the 15th century began the extension of the former castle, leading to the Palace of the Kings of Navarre. Almost everyone calls it “castle”, however, it is right to refer to it as “palace”. The reason being it is a building of courtly character, where the residential aspects have prevailed over the military characteristics.

Fun activities that occurred include jousting tournaments, bullfights, and weddings. An important aspect to the palace was Basque pelota, which is the name for a variety of different sports played on a court.

The palace was so extravagant that people of that era used to say that the building has more rooms than days in a year. It even used to be home to a zoo and admired hanging gardens.
Some of the many grand and famous rooms include:

One of its main attractions of this building is the apparent disorder of its design. Its construction was never a result of an overall plan. The final design was the result of ongoing expansions and reforms that followed for centuries. The then King of Navarre, Charles III “The Noble”, decided to convert the existing palace to a permanent royal seat and give it its very own ornaments.

The set consists of its rooms, gardens, and moats, surrounded by high walls and topped by numerous towers, give a spectacular and magical figure. In its time, came to be regarded as one of the most beautiful in Europe. It can clearly differentiate two areas: the Old Palace, become in Parador Nacional de Turismo, and the New Palace.
After the invasion of Navarre in 1512 by the Crown of Castile and Aragon unified, began the deterioration of the palace, as it was only used by the viceroys as residence sporadic. The state of abandonment in which was immersed in the palace it was progressively deteriorating.

The hanging gardens were home to plants that were dangled over 20 meters high. To ensure the courtyard would not cave in as a result of the massive pots, a cave was built directly below. This cave is known as Sala de los Arcos (Room of Arches) or Sala de los Murciélagos (Room of Bats).

The past zoo was a former home to giraffes, lions, camels, and many different species of birds. The remains of the aviary still are present, called Patio de la Pajarera.

In 1813, the palace was almost completely ruined by a fire directed by the guerrilla Espoz y Mina during the Peninsular War (1813), fearing that on it was fortified the French troops of Napoleon.
Restorations to bring the castle back to its prior glory were completed in 1967 and funded by the Foral Government of Navarre.

Check out the history of the Roman Walls of Lugo here

Feel free to contact us at info@followthecamino.com for information on walking the Camino, the Camino de Santiago tours or our services.