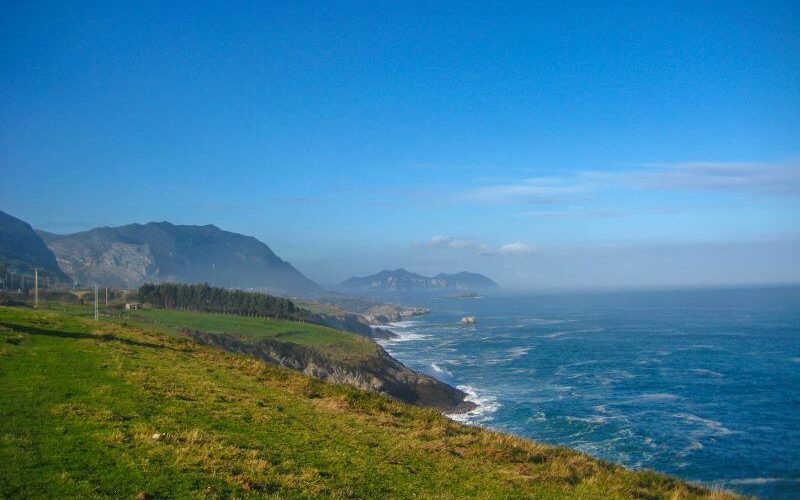 The Camino del Norte or Northern Way is one of the oldest ways pilgrims walked to Santiago de Compostela. After the discovery of the remains of St. James in Santiago during the 9th Century. King Alfonso II of Asturias was the first to make the pilgrimage to the relics of St James.

Making Oviedo his kingdom was a strategic decision, as all ways passed through Oviedo to reach Santiago de Compostela. Any pilgrims traveling from the South-West of France had to pass through Oviedo. As well as those landing in ports along the northern coast. Some pilgrims made their way to Oviedo before joining the Camino Primitivo (Original Way) to reach Santiago.

From a geographical and practical viewpoint, many pilgrims recognized that following the coast to Oviedo was a much easier route. Traversing the Cantabrian Mountains was not an option. Thus why the Northern way is also known as the “Ruta de la Costa”.

The French Way became less dangerous with the reconquest of Spain in the 11th Century. The Camino Frances began to grow in popularity for pilgrims coming from France.

During the 12th Century after the death of King Alfonso III, the royal court moved to Leon from Oviedo. Oviedo’s importance started to fade. This impacted the number of pilgrims taking the Northern Way route to Santiago. Bishop Pelayo tried to promote the church of Oviedo as a pilgrim destination by falsifying records but to little avail.

The Black Death affected Europe from the 14th Century to the late Middle Ages. During the 16th century, the reformation and political unrest in Europe affected pilgrim numbers. Fewer pilgrims traveled to Santiago and thus the routes became much quieter.

The Northern Way would have traditionally started in Irun, Spain opposite the French town of Hendaye.

The route initially follows the rugged coast of the Bay of Biscay. It then skirts the green and rocky cliff tops and sandy beaches of the Asturias coast to Ribadeo, in Galicia.

At Ribadeo pilgrims would have had to take a boat from Castropol to Ribadeo. You can walk further inland and cross the river at a more convenient spot before heading for Lugo and then Santiago de Compostela.

There are many variants along this traditional route that allowed the pilgrim to cross over the Cantabrian Mountains to follow the French Way. From Torrelavega you could take the Ruta de Campoo to Carrion de los Condes.

The Camino del Norte packages that we provide start from San Sebastian to Oviedo which gives you a real taste of this coastal and hilly Basque region.

If you wish to continue onto Santiago de Compostela you have the option of going on the Camino Primitivo, which takes you to Lugo and then has you joining the French Way at Melide.

If you would like to learn more about the Camino del Norte, get in touch with one of our Camino Experts! We can help you plan the customized walking holiday you’ve been looking for on the Camino.