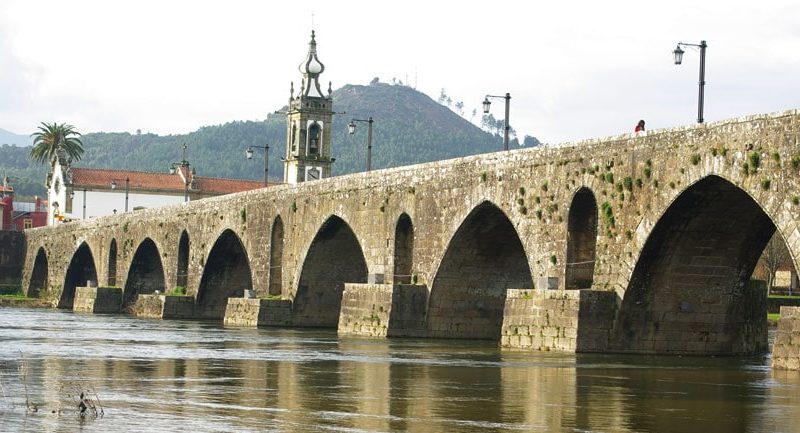 Ponte de Lima is one of the oldest towns in Portugal.  Established and developed by the Romans on the site of a celtic settlement.  Ponte de Lima was an important town on the Roman road to Santiago de Compostela and Lugo from Braga.  Today it is known as one of the stop over towns on the Camino Portuguese.  The name of the town comes from the long Roman bridge with its low pointed arches that crosses the Lima river.  The Romans believed that the river Lima was the Lethe, the river of forgetfulness and one of the five rivers to the underworld of Hades.  This belief was impeding the military campaign of Decimus Junius Brutus in 138 BC and so he crossed the river and then proceeded to call each of his soldiers by name across. Astonished that their general had not lost his memory they all followed across without fear and so the myth was dispelled.

In 1125, on the 4th March, Teresa (Countess of Portugal and Alfonso Henriques’ mother), recognized Ponte de Lima as an important town, both for its economy and its strategic location.  This was also prior to the kingdom of Portugal being established by Alfonso Henriques which didn’t happen until 1143 and also when he became the first king of Portugal.  So this town is in fact older than Portugal!

Ponte de Lima – Things to do 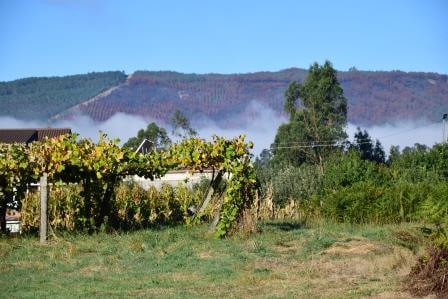 Ponte de Lima is located on the southern side of the Lima river in the district of Viana do Castelo.  It is also in the heart of the Minhoregion which is renowned for the vinho verde it produces.  This ‘young wine’ is available in red, white and rose and is consumed shortly after bottling.  Traditionally the grape was grown on tall pergolas, up trees and fences so as to leave the ground free for other crops.  Although most vineyards now use more modern methods you can still see some examples of this traditional way of growing grapes in the region.  If you are interested in the wine of the regions whilst you are on your Camino why not stay in an old country manor house such as Quinta da Agra where the ground floor of the house was originally built for wine making.  Every year there is also the Festival of Vinho Verde, which is held in June.  During this festival you will have the opportunity to sample the wine of the region, pairings with local food as well as enjoy the lively entertainment. 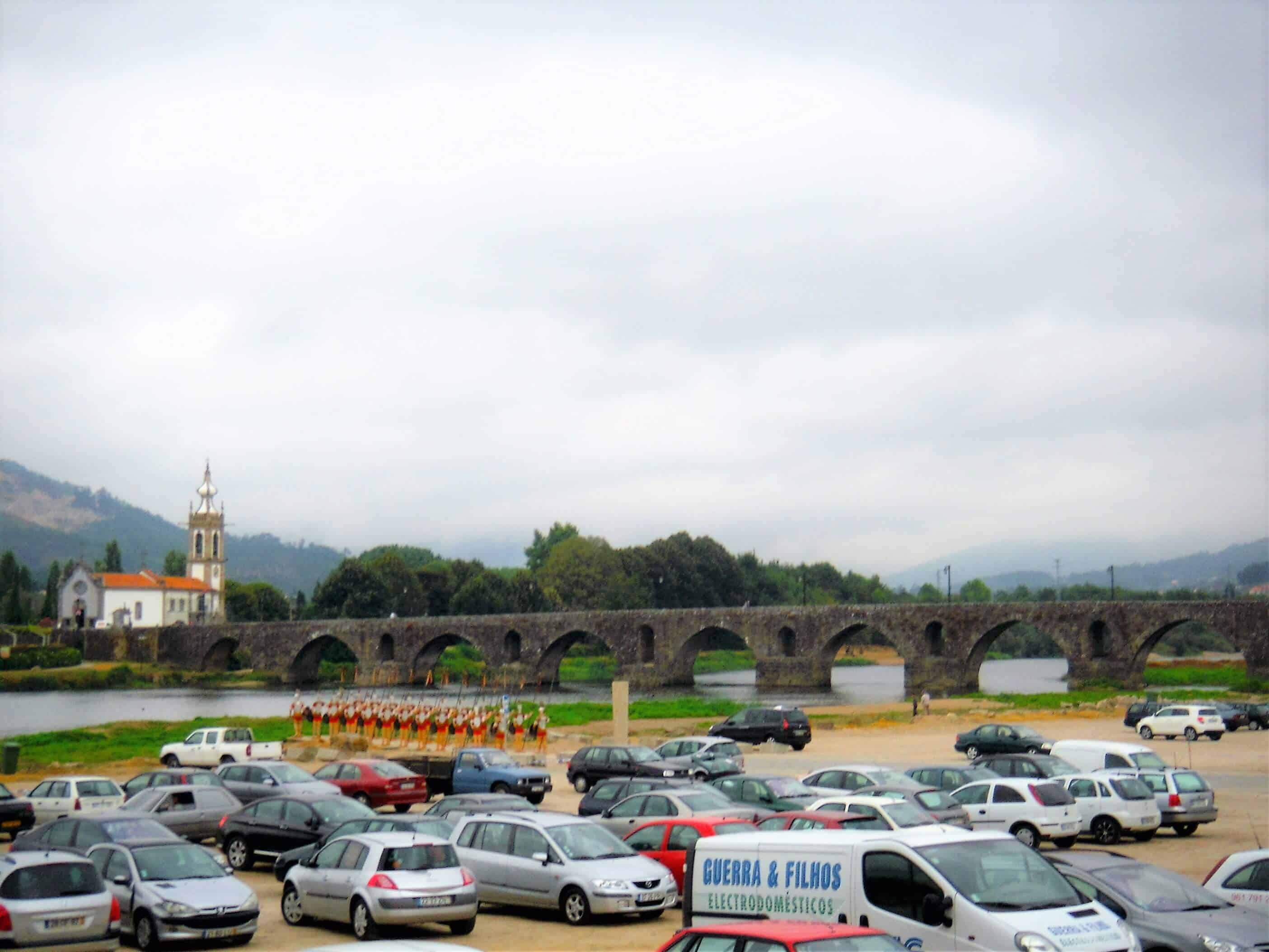 The bridge, for which this town is named after, is part of the Camino de Santiago  route that runs through Ponte de Lima.  So even if you don’t have time to stay in this beautiful Lima Valley town you will get to see and cross this bridge.  This bridge supposedly marks the spot where the Romans crossed the river all those years ago.  Nearby the river there is 24 wooden Roman soldiers waiting to be called across, and show how this story of the bridge is still apart of the town’s fabric.  The current bridge was completed in 1359 and is almost 300 meters long and 4 meters wide.  Originally an integral part of the Roman road that ran through this area in regards to trade and for military purposes the bridge today is part of the Camino Portuguese and has provided safe passage over this river for many years. 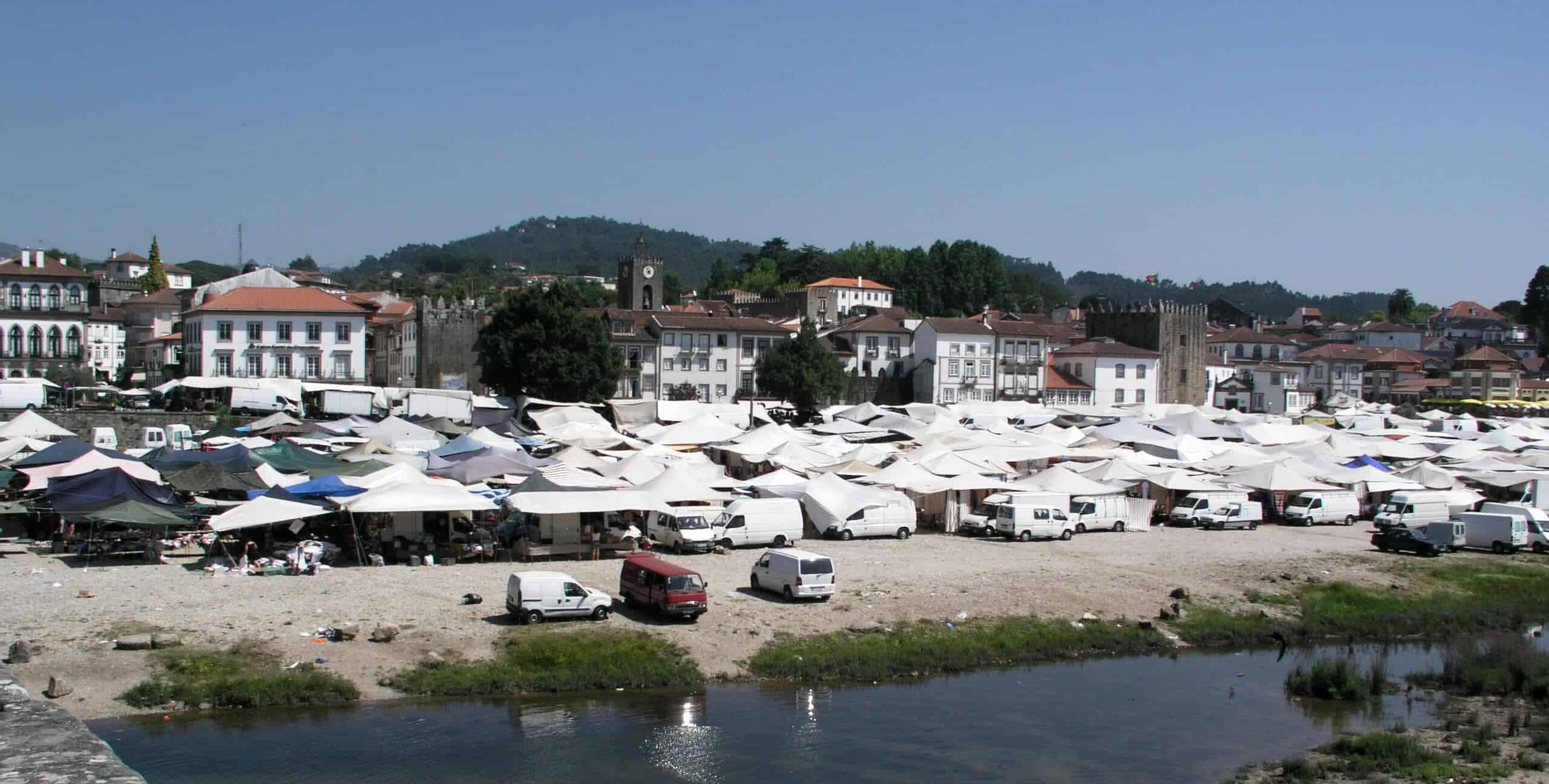 Since the Middle Ages Ponte de Lima has held a market every fortnight and to this day it is one of the biggest in all of Portugal.  The lively market, Feira Quinzenal, is held every second Monday right on the sandy banks of the Lima.  Under the tents of traders you can buy everything from clothes, to food, to household items.  For a real treat though if country fairs are right up your street why not arrange your Camino Portuguese to be passing through Ponte de Lima on the second weekend in September.  This is when the Feiras Novas (New Fairs) is celebrated and has been since 1826.  This four day event is as much a festival as a market.  Throughout this weekend the festivities include fireworks, fairground rides, folk music and gigantones(enormous carnival-like statues). 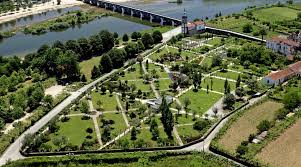 Ponte de Lima is the most floral town in Portugal and when you walk through here on the Camino Portuguese it is not hard to see why it has this reputation.  Crossing the Roman bridge you will have the opportunity to visit the Parque Temático do Arnado.  Here you will find a botanical garden greenhouse as well as four themed gardens: The Roman Garden, The  Labyrinth Garden, The Renaissance Garden and The Baroque Garden.  This is not the only green space in Ponte de Lima as you wanderaround this beautiful town you will find many horticultural gems.  Each year since 2005 there has been a Garden Festival held from May to October which falls in line with the main season for walking the Camino Portuguese.  During this festival there are twelve different gardens that are open to the public to view and to vote for the winner.  The gardens, which are related or not to a defined theme, are intended to exhibit the different styles and interpretations in the art of creating temporary gardens.  Be sure to visit these visually enticing gardens when walking through Ponte de Lima and who knows your favourite could end up being the winner. 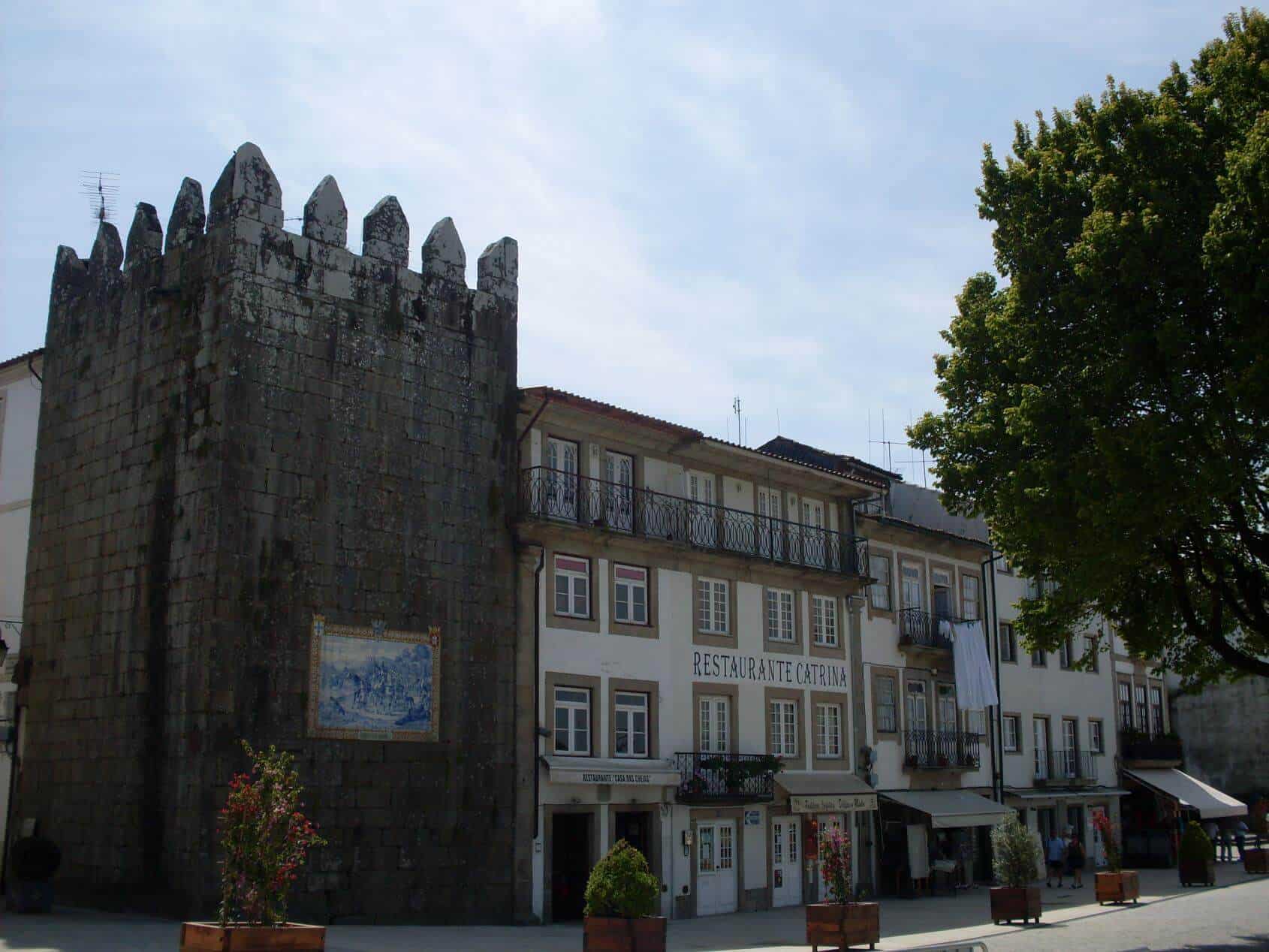 For those interested in the built heritage of this area, Ponte de Lima does not disappoint.  Simply wandering around the old streets of the town you will see many fine examples of elegantly designed buildings.  In the 14th Century the town had a wall built around it with nine towers and six doors as entrances.  During the 18th Century as the town expanded the walls were pulled down for their stone and to make room.  Today only two towers remain and some of the walls.  Torre da Cadeia Velha was the prison up until 1960 and now an historic building it houses the local tourist office.  Torre de São Paulo is built into what remains of the walls and has a curious azulejo picture on its front entitled “Cabras são, Senhor” (They’re goats m’lord).  The local story is that Dom Afonso Henriques almost attacked a herd of goats mistaking them for Moors.

There are many beautiful churches and religious buildings to visit in Ponte de Lima each holding their own interest.  The former convent of St. Anthony of the Friars along with its church and attached facilities of the Third Order of St. Francis are now a museum dedicated to religious art, the Museu dos Terceiros.  For a wonderful view over the town and Lima Valley visit the the Chapel of Nossa Senhora da Misericórdia das Pereiras, which has an unfinished tower. 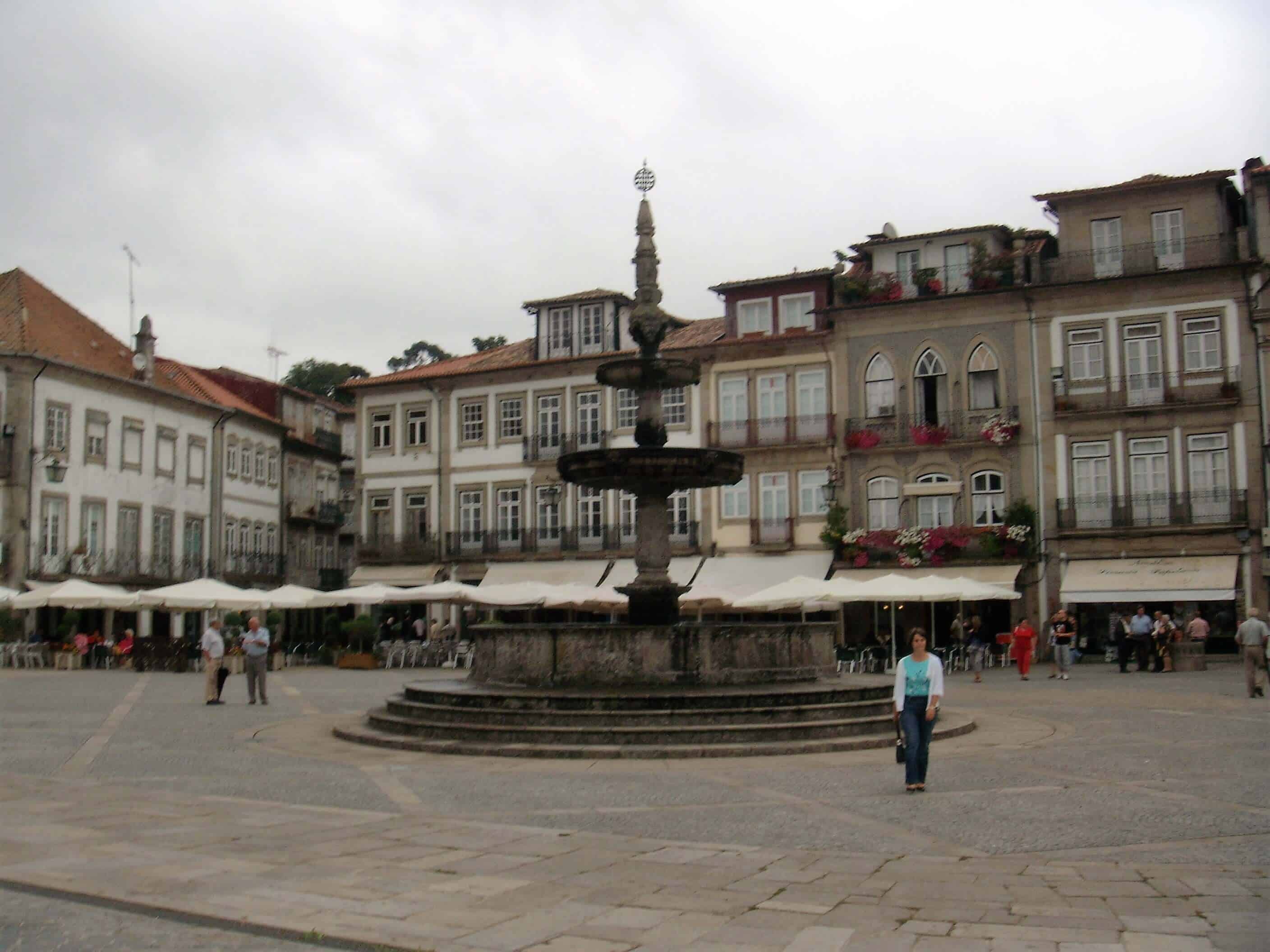 With so much to see and do in Ponte de Lima you will certainly work up an appetite quickly if not already whilst walking the Camino Portuguese.  Relax in the main square by the Largo de Camões, an 18th century fountain, where there are many cafes with tables out the front to watch the world go by.  There are two traditional local dishes that are a must try when you are in Ponte de Lima: Arroz de Sarrabulho and Bacalhau.  Arroz de Sarrabulho is pork that is marinated in bay leaves, cloves, nutmeg, a touch of salt and pepper for seasoning that once cooked is shredded and added to rice.  At the end cumin is added to give this dish a unique flavour.  Bacalhau is salted cod with onions and is a popular dish in many of the taverns and restaurants of the town so if you are not a fan of pork this may be the dish for you.

Ponte de Lima is found on the fourth section of the Camino Portuguese which goes from Porto to Tui.  So if this has sparked your interest in this section of the Portuguese Way then get in touch with our Camino Planners to organise your trip: email info@followthecamino.com