Albarino Wine on the Camino 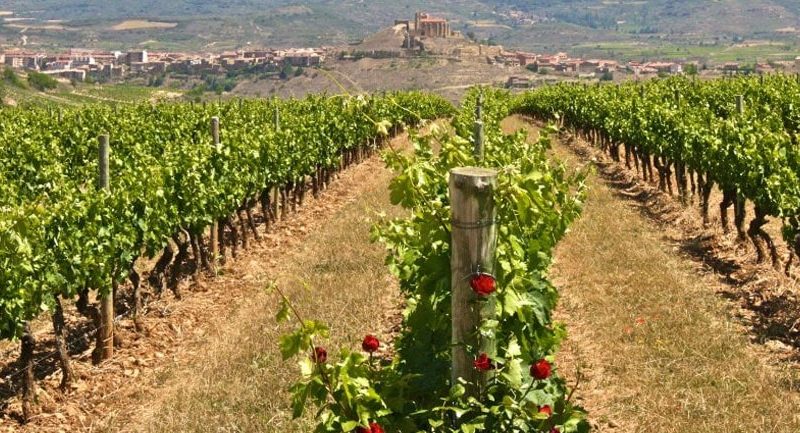 Are you going on a pilgrimage to the Camino the Santiago and a white wine lover? Then the Portuguese way is the best route for you to taste Albarino wine on your Camino.

Albarino wine is made from the Albariño Grape or Alvarinho Grape, which is a type of green grape that is found in both the region of Galicia in Spain and Minho in Portugal.  It is best known for being the grape used to produce the Rias Baixas DO wine from the Atlantic coastal region of Galicia.  In Portugal it is the grape of choice in the Vinho Verde region to make the Vinho Verde white wine.

One theory on the origin of this grape is linked with the Camino de Santiago.  It is believed that the grape was brought to the region by German pilgrims from the Rhine on route to Santiago de Compostela.

The name perpetuates this origin as “Alba-Rino” means “the white from the Rhine”.  Another theory is that the grape was brought to the region from Burgundy by Cistercian monks, who often established vineyards where they built their churches.  Trust the French!

Portuguese Camino: the best way to taste the Albarino wine

The Albarino grape produces a unique white wine.  It has high acidity and can produce either a light white wine or a fuller style depending on the ageing process used.  When you walk the Camino Portugues you will have many opportunities to try this wine and if you do you will note that it has a very unique and interesting smell, similar to peach and apricot.

The close proximity of where the Albarino grape is grown to the Atlantic Ocean can also often be tasted on the wine itself through a slight salinity.  This makes it a perfect wine to pair with seafood.  In Portugal, the wine from the Albarino grape is bottled with some carbon dioxide giving a light sparkling sensation and thus distinguishing it from the Spanish wine.  So if you prefer a slight fizz to your wine then the Portuguese Albarino may be more to your liking.

A versatile grape, Albarino is often fermented in stainless steel to facilitate early drinking.  However, it also responds well to different fermentation techniques such as malolactic or barrel fermentation and longer maturation which results in wines of wonderful complexity and ageing ability.  The Albarino grape is also influenced by the soil in which it is grown.  A more mineral-driven and structured wine is yielded when grown in highly acidic, granitic earth. Whereas when it is grown in sandy soil the Albariño grape gives a softer, rounder wine.

If you are ending your Camino in Santiago then you will be walking through Galicia which is the region of Albarino wine.  No matter which Camino route you are walking you will get ample opportunity to try Albarino wine as it is very popular throughout the north of Spain and Portugal.  There are three distinct wine regions in this northwestern area of Spain and Portugal that use the Albarino grape to different extents.  The Rias Baixas on the coast, to the south across the border in Portugal is Minho and to the east of both these regions is Ribeiro in Spain.

The vineyards producing the Rias Baixas are located in the province of Pontevedra, which is one of the main towns to stop in on the Camino Portuguese.  In this region the albarino grape makes up ninety percent of the grapes produced in this region.

Almost 100% of the wine produced here also carries the Denomination of Origin (DO) designation.  The varietal composition for a wine to be labelled Rias Baixas must be at least 70% Albarino.

Within Rias Baixas there are five sub-zones that all contribute their own distinct quality to the wine. This natural effect coupled with each vineyard’s own unique style of wine making provides a wide variety of different tastes to wine made from the albarino grape.

Val do Salnes and Soutomaior

It is said the best wines of the Rias Baixas come from the sub-zone Val do Salnes, which is known as the birthplace of the albarino grape. Located on the Atlantic coast this is the wettest and coolest zone and is just north-west of Pontevedra. Here grapes grow on the gentle slopes and valley floor of the Umia River.

Just south then of Pontevedra is Soutomaior which is the smallest sub-zone, nestled in the hills of the Rias de Vigo.

Condado do Tea and O Rosal

The final sub-zone, Ribera do Ulla is the furthest north, the only inland zone and the most recent, having only been registered in 2000.

Whilst walking the Camino Portuguese route through Spain you will have ample opportunity in this area to try Albarino wine.  If you are walking the Coastal Portuguese Camino (occasionally called the Surf & Turf) what better place to sample the Albarino wine of the O Rosal sub-zone than A Guarda.  This fishing village provides a picturesque setting to not only sample the wine, but also enjoy some seafood that goes so well with the wine.

If you are walking the inland, traditional Camino Portuguese through Tui, you should sample wine from both the O Rosal and Condado do Tea sub-zones.

Moving north along the Camino Portuguese from Vigo to Pontevedra you will pass by the sub-zone of Soutomaior.  In Arcade be sure to stop and perhaps try a glass of the locally produced Noelia Bebelia.  If you would like to visit a winery and see how this wine is made then why not book an extra night to stay in Pontevedra and visit one of the most famous wineries of the Val do Salnes sub-zone, Bodegas Martín Códax.

In Padron, you will be passing through the Ribeira do Ulla sub-zone.  Here you should take advantage of the opportunity to sample the locally produced Pazo Arretén.  This fresh and elegant wine makes a great accompaniment to the popular tapas dish of fried green peppers, Pimientos de Padron.

If however you haven’t walked the Camino Portuguese this time and are in Santiago de Compostela why not take a boat tour of the Rias Baixas to get a taster for the area and of the wine.

The “Vinho Regional” Minho is another name for the DOC Vinho Verde. This area stretches from the River Minho in the north, bordering Spain, to the city of Porto and then inland as far as south the river Douro. Vinho Verde is the biggest Denominação de Origem Controlada (DOC) of Portugal.

Similar to the Rias Baixas, there are sub-zones within this large region. There are nine regions and they are named after rivers or towns of the vicinity. They are from the north Monção/Melgaço; Lima; Basto; Cávado; Ave; Amarante; Baião; Sousa and Paiva.

The alvarinho grape, as it is known in Portugal, is predominantly used in wine from the Monção/Melgaço sub-zone. Wines from the town of Monção are viewed as the best Vinho Verde. They are also the only wines exempt from the Vinho Verde production laws stipulating a maximum alcohol volume of 11.5%, and in fact often reach closer to 13%.

Walking the Camino de Santiago along the inland Portuguese route you will pass by the alvarinho vineyards of São Julião, which are located between Rubiaes and Valenca.  Stopping in Fontoura why not try a glass of the locally produced Quinta Edmun Do Val Reserva Alvarinho.  It is also possible if you have the time to visit this winery, Edmun do Val.

The Ribeiro region is located east of the Rias Baixas in the province of Ourense and is one of the longest established wine growing areas in Spain. The Ribeiro wine was also one of the first products in Spain to be awarded the Designation of Origin. Winemaking was introduced by the Romans and then cultivated by the Cistercian monks during the middle ages.

To this day it is one of the primary sources of income and employment for the region. Vineyards of all sizes are everywhere in this region. From large commercial bodegas to small holdings that only produce locally for family and friends. In this region the albarino grape is only one of the principal grapes used. The other varieties are Torrontes, Treixadura, Godello and Loureiro. Due to the use of other grapes the wines from this region are less acidic than those from Minho or the Rias Baixas.

Whilst walking the Via de la Plata when you get to Ourense, or if you start your walk to Santiago from here, you might want to book an extra night so that you can visit some of the vineyards of the region.  If you don’t have time then be sure to ask to try some of this local produce which pairs well with not only shellfish and fish but mild cheeses, cured sausages and meats.  What a gastronomic treat for your Camino journey.

If you have any more questions about our Camino de Santiago tours, please feel free to contact us at info@followthecamino.com

Solo, with friends, with family or as part of a guided group – Let us help to create your dream trip!