The Cathedral of Santiago de Compostela 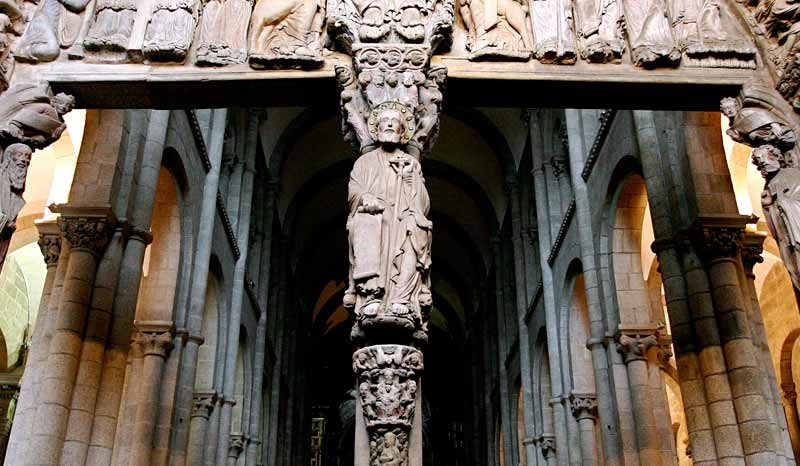 As a result of this, it is the destination for pilgrims walking the Camino de Santiago (The Way of St. James) and has been since the Middle Ages.

History of the Cathedral

After St James was beheaded his remains were returned to Galicia where he had been spreading the word of Jesus.  Over time the location of his remains was lost until the 9th Century when they were rediscovered by a hermit.  Bishop Teodomiro of Iria Flavia recognised the discovery as a miracle and informed  King Alfonso 2nd “The Chaste”  who ordered a modest church to be erected on the site.  Over the years various Kings wanted to leave their mark and so the church was expanded.  This was also recognition of the growing number of pilgrims to the shrine.

In 1075 after a period of increasing numbers of pilgrims and stability from Arab attacks a new construction was begun.  This was during the reign of Alfonso 6th and under the direction of Archbishop Diego de Peláez. Work started on the Romanesque cathedral, continued during the period of Archbishop Diego Gelmírez, and did not stop until it became the large building we can see today.

The Cathedral has recently undergone restorations on its facade and many of the spectacular works of art inside. The last of the scaffolding that had surrounded sections of the cathedral for several years was removed in December 2020 – just in time for the 2021 and 2022 Holy Year!

In special religious events, visitors may have the chance to see the unique ceremony of the Botafumeiro, a spectacular incensory made of silver-plated brass, weighing eighty kilos. It is said that the Botafumeiro’s original purpose was to perfume the church which tended to smell rather strong during the pilgrim mass after 100s of pilgrims had made their way across the continent by foot for months at a time.

It hangs on a rope from the centre of the transept, and it is moved from its stationary position by being pushed. As it swings like a pendulum, eight men (called tiraboleiros) let out the rope at the apex of the swing and pull on it at the lowest point.

This amplifies the incensory’s oscillation swinging it to 21 metres up in the top of the vault, in a 65-metre arc along the transept from the Azabachería to the Praterias doorways. It passes along at floor level at a speed of 68 km/h, leaving behind it a fine trail of smoke and a fragrance of incense.

The building is a predominantly Romanesque structure with later additions adding both Gothic and Baroque features.

The cathedral is built in granite masonry with roofs in slabs of the same material. It has a Latin cross ground plan, with a longitudinal arm and transept in three aisles, an ambulatory in the sanctuary and a tribune that runs along the whole perimeter; side chapels are arranged along the whole interior with their own individual space.

It stands in the old town area of Santiago, and each side faces onto a street or square. The most famous facade is the one facing Obradoiro square. This facade of the basilica is in the Baroque style and was completed by Fernando de Casas Novoa in 1740. The main door on this side of the cathedral is the Pórtico da Gloria.

The south facade of the cathedral, or das Pratarías, is the only Romanesque façade that is preserved in the cathedral. It was built between 1103 and 1117 and elements from other parts of the cathedral have been added in subsequent years.

The façade of the cathedral that overlooks the Quintana Square, the east facade, has two gates: the Porta Real (royal gate) and the Porta Santa (holy gate). The holy gate protects the Holy Door, which is only open to pass through on Holy Years, or Years of Compostela.

The façade “da Acibecharía” on the northern side of the basilica in Santiago de Compostela was originally Romanesque, however, it was demolished after a fire. A few pieces of the facade were saved and moved to the façade das Pratarías. The new façade was designed in Baroque style and finished in the neoclassical style in 1769, although it retained some traces of the baroque.

The Squares around the Cathedral

There are four impressive plazas in front of each of the four doors of the cathedral:

The main plaza was given the name of Obradoiro (workshop in English), as for nearly ten years, between 1738 and 1747, the Obradoiro, was where the stones for the Baroque facade were cut and carved. This part was the work of the Galician architect Fernando Casas e Novoa.  It replaced the early Romanesque facade. The towers on this side reach a height of 74 metres tall.

Along the other side the Palacio de Xelmírez, still thrives, built in the XII century at the same time as the early Romanesque cathedral. The canons now reside on the opposite side now which houses the Cathedral Museum.

The Praza da Acibechería is the first square you arrive into when you get to Santiago by the French Road. It was known as the Puerta del Paraíso or Door of Paradise but, was replaced by the present neo-classical style square in the XVIII century. The craft of jet working which is closely linked to the Pilgrimage prospered in Santiago from the XV century onwards. The square would have been buzzing with the workshops and stalls.

On the opposite side, the door of the southern arm of the cathedral’s cross aisle preserves all the traditional and conventional images and symbols associated with St. James and the Camino de Santiago.  Also, the richness of the Romanesque art of Compostela’s golden age is the Porta das Praterías. Beside it stands the Torre do Reloxo, (Clock Tower) or the Berenguela, of Baroque style, as are the other buildings surrounding this square, except the building of the old Bank of Spain, that is nowadays being prepared to house the Museo das Peregrinacións (Pilgrimage Museum) of Santiago.

Right behind the cathedral is the wide open space of the Praza da Quintana. The Porta Santa or Holy Door, which faces this square is only open in the Compostela Holy Year, when the festival of the Apostle St. James happens on the 25 July and falls on a Sunday.  This square is split over two levels.  The upper level is known as Quintana de Vivos (`Quintana´ of the Living) and the lower level and larger area is known as Quintana de Mortos(`Quintana´ of the Dead).  This area was until 1780 a burial ground.

Here are another three fascinating buildings from different periods and styles close to the square.

Firstly, the Colexio de San Xerome, founded by Bishop Fonseca, with a Romanesque-ogival portal, the Palacio de Raxoi, of XVIII century neoclassical style, which was built as a confessors’ seminary, a choirboys’ residence and town hall for the city.

And finally, the Hospital Real, which was ordered to be built by the Catholic Kings to take in pilgrims and where sick people were to be taken care of. It is a fantastic example of Plateresque style which is very unusual in Galicia and therefore has now been renovated into the modern-day Parador (hotel).

The experience of walking into Santiago de Compostela at the end of your Camino and seeing the cathedral for the first time is truly incredible. Experience it for yourself and explore the cathedral! Your adventure starts here with a few easy steps –

We have been supporting pilgrims from all over the world on the Camino since 2006. Let us help you to make this a wonderful and worry-free experience.

See you at the Cathedral!