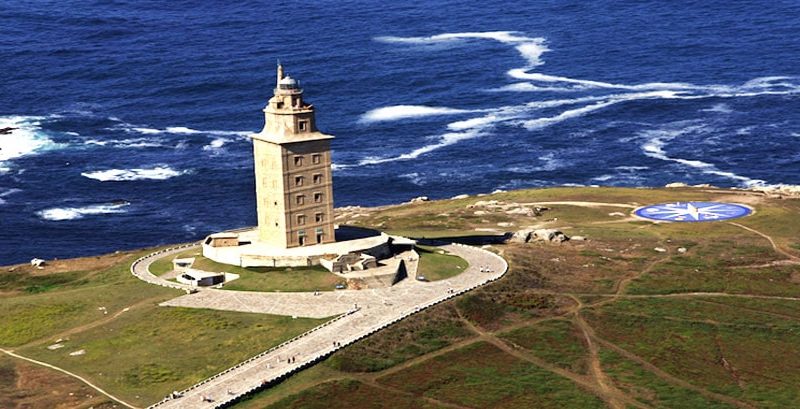 The Jacobean pilgrimage enjoyed widespread fame throughout medieval Europe. Land and sea alike were furrowed with routes full of spirituality leading to Santiago de Compostela. The English Way or ‘seafaring way’ was packed with pilgrims from Scandinavia, Flanders, England, Scotland and Ireland on their way to destinations such as Ribadeo, Viveiro, Ferrol and A Coruna.

Blessed by an exceptionally strategic location, the latter two coastal enclaves are the starting points of the two alternate itineraries that make up the English Way. The A Coruna-Santiago route covers a distance of 74km, while the stretch linking Ferrol-Santiago is 118km long.

The pilgrimages from Scandinavia and the British Isles began in the XIIth century. One of the most noteworthy episodes on the English Way occurred in 1147 with the arrival of a squadron of crusaders on their way to the Holy Land. This squadron took part in the conquest of Lisbon, aiding the first king of Portugal in his struggle against the Muslims. Before facing any bellicose encounter, crusaders from England, Germany and Flanders would visit the tomb of St. James.

The first maritime itinerary was recorded between 1154-59 by the Icelandic monk Nicholas Bergson and describes the voyage from Iceland to Bergen (Norway), Aalborg (Jutland), and Vyborg, sailing down the Kiel Canal that marks the border between Denmark and Germany. This monk continued on foot to Rome, on his way to the Holy Land. Icelandic and Scandinavian pilgrims travelling to Santiago took this maritime route to Denmark, continuing their journey on foot to Roncesvalles, or by boat to the north of the Iberian Peninsula.

During the Hundred Years War that raged between France and England throughout almost the entire XIVth century and the first third of the XVth century, the British used boats to travel to Santiago.

The vessels that were chartered for this purpose would set sail with permission from the Crown in London, Bristol, Southampton, and Plymouth. They would return to England loaded with goods from Galicia. The presence of these pilgrims in Santiago is well-documented by the ceramic pieces and coins dating from the XIVth and XVth centuries, found during excavations in the cathedral.

Other traces of seafaring pilgrimages can be found in the offerings made to the apostle. The most outstanding being the famous portable alabaster altarpiece depicting the life of St. James. This was donated to the cathedral of Santiago de Compostela in 1456 by Father John Goodyear. He was the parish priest of the church of Chale on the Isle of Wight (diocese of Winchester).

This work of art and part of the collection of the Cathedral Museum portrays five scenes in the life of the apostle: his vocation, his preaching in Hispania, his martyrdom in Palestine and the translation of his body by boat to Galicia.

Another splendid offering related to the pilgrimages undertaken from the British Isles is the “Pearl cross”. This piece, crafted in gold and silver, displaying enamel work and studded with pearls and gems. It was created in Paris around 1375-1400 and donated by King Jacob IV of Scotland (1475-1513). The divorce of Henry VIII (1509-47) from Catherine of Aragon caused him to break ties with the Catholic church, thus bringing an end to the pilgrimages from England.

Embrace the spirit of the Camino and contact us today to start planning your trip!

Bring your family, bring your friends, or walk the Camino solo.

It is an experience you will never forget.