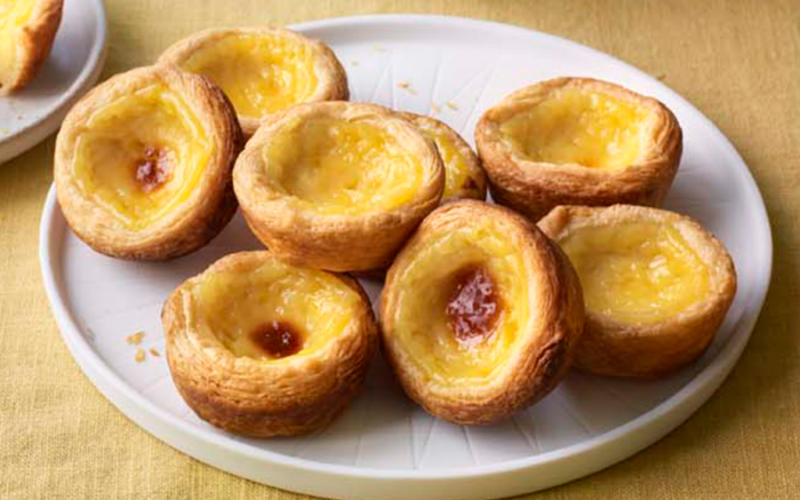 Also known as Pastel de nata when it is not made in the Fábrica de Pastéis de Belém, this delicious pastry is a traditional Portuguese custard tart made with fresh egg custard poured into a flaky, crispy pastry. It is one of the treats that you absolutely must try if walking the Portuguese Way of the Camino de Santiago!

Pastel de Belém is usually served piping hot, topped with icing sugar and cinnamon powder. The scrumptious dessert (which is also regularly eaten at breakfast time) is a speciality of Portugal.

While it was created in Lisbon, the pastry has various regional variations. Different bakeries and pastry shops sell their own version of Pastel de Belém. You’ll find a creamy, sturdy tart in some towns while in other places, you’ll come across puffed up, jiggly pastries.

You may even be able to find a version of this tasty eggy tart in your own country, as they have become increasingly popular around the world!

The History of Pastel de Belém

Lisbon is the original homeland of Pastel de Belém. The pastries were invented at the beginning of the 18th century by Catholic monks of Jerónimos Monastery, at Santa Maria de Belém, Lisbon. The monks had moved from France where similar pastries were commonly found in the bakeries.

In the 18th century, it was common for convents and monasteries to use a large number of egg whites for starching clothes. Pastel de Belém were actually made from the leftover egg yolks! The practise continued and in a very short time, the recipe of sweet pastry became popular throughout the country.

After the Liberal Revolution of 1820, the religious orders faced extinction and many convents and monasteries were closed down. The monks of Jerónimos Monastery began to sell Pastéis de Belém at a nearby sugar refinery to bring in some money. In 1834 the monastery was shut down and the ‘secret’ recipe was sold to that sugar refinery. The owners of the refinery opened their own pastry shop by the name of Fábrica de Pastéis de Belém in 1837.

Fábrica de Pastéis de Belém is still a family business family and is one of the most popular sweet shops in Lisbon today. You can visit this shop yourself to taste the mouthwatering Pastéis de Belém. Make sure you arrive early as the queue can be long! It is worth it though, and a great way to begin your spiritual walk in Portugal on the Camino Portuguese.

The secret recipe is closely guarded to this day. Currently, there are only three chefs who have been entrusted with the recipe. They blend the ingredients behind the closed metal door and later, the rest of the staff assemble and shape the pastries.

Once cooked, they are served to eager waiting customers. Other specialities in the bakery are marmalade, Bolo Ingles, Salgados, and Bolo Rei and Bolo Rainha which are available during the Christmas season. Other pilgrim-friendly eateries that have Pastel de Belem or Pastel de Nata include Paco Real where they serve the pastry at room temperature.

If you would rather skip the line, you can also go for one of the other fantastic (and very similar) egg custard pastries – Pastel de Nata – in most bakeries in Portugal.

Make the Portuguese Custard Tarts on Your Own!

If you take a fancy to Pastel de Belém or de Nata and want to sweeten up your day, follow the below-mentioned recipe and bake your own delicious Portuguese custard tarts.

Here are the ingredients that you will need to make Pastel de Nata:

Eat your Pastel de Nataright away or let it cool down.

Contact a Camino Expert to get a free quote!