If like us, you enjoy a glass of wine, you’ll be in your comfort zone along the Camino de Santiago. There’s a multitude of vineyards along the route and it’s possible to take day trips to some of the world’s best-known and oldest winemakers to taste something a little more authentic than what you’ll find in your local supermarket or off-license. We’ve chosen our Top 5 to give you a taste of what the Camino de Santiago has to offer… Salud!

Txakoli (pronounced ‘Chacolee’) is a very old wine which comes from across the north of Spain. In particular, the Basque region where it’s ingrained in their culture. It’s usually a white wine but can come in red or rose, although rare. Typically, the white wine is a pale yellow or green colour. White Txakoli is very dry and lightly sparkling with acidity, and low in alcohol. This is usually served as a young wine (one year or less from bottling date) and most often as an aperitif. Of course, being served in the Basque country one should enjoy with pintxos! Some of the most common variations of Txakoli in the Vasque region include Txakoli from Getaria, Txakoli from Biscay, Txakoli from Alava and Txacolí from Cantabria. Each type of Txakoli will vary slightly in its acidity and colour. 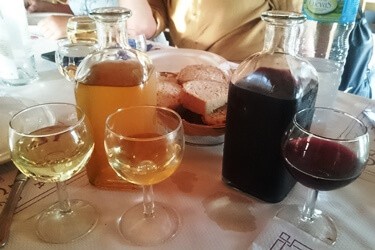 Like many wines, Tempranillo wine has a mixed history. There are myths involving monks, theories that it has an American influence, and even ties to the Roman god of wine. Whatever the history, this grape variety is blended with almost every red wine that comes from Spain and Portugal. It’s grown in Castile and León and other regions across north and north-west Spain. Tempranillo grapes are not naturally very acidic, which is why they blend very well with other varieties. This wine can be characterized as a medium-to-full-bodied wine with red fruit characteristics. Tempranillo translated literally means “little early one” and was a name given to it by Spanish winemakers who noticed it ripening earlier than other grape varieties. This wine goes lovely with a tomato-sauce based dish. Also, you should try it with any dish that features corn as a major ingredient. 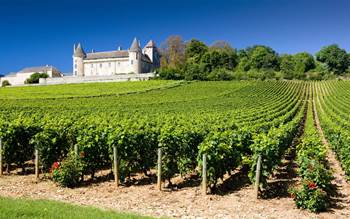 Albariño is grown in Galicia and north-west Portugal. It’s a white wine grape noted for a distinctive botanical aroma which is similar to that of Viognier or Gewurztraminer, therefore suggesting apricot and peach flavours. Albariño has also frequently been considered a sister wine of Riesling. The wine produced from this grape is particularly light and generally high in acidity and with alcohol levels of 11.5–12.5%. Its thick skin and large number of pips can cause residual bitterness.  Spain produces Albariño to a significant degree in the Rías Baixas, denominación de Origen, which means you’ll pass through her along the Portuguese coastal route (Pontevedra). When you are sampling this wine, try pairing it with the local seafood dishes.

Made from grapes grown in the autonomous communities of La Rioja and Navarre, and the Basque province of Álava, which is a region you’ll pass through along the French Way. A distinct characteristic of Rioja wine is the effect of oak aging and the pronounced vanilla flavors which is essentially a trademark of the region. Nowadays modern winemakers are experimenting with making wines less influenced by oak which is contributing to a wider variety of flavors from Rioja. Reds (or ‘tintos’) are classified into four categories, as shown below.

When trying the reds, you should order a lamb dish. The tenderness of the meat, mixed with the aroma of the wine will make for a wonderful meal. If you’re trying the white variety of Rioja, sample little menu items, like white fish or salads.

Usually characterized by fresh fruity notes, smooth tannins and a notable reflection of the mineral environment in which it’s grown. Bierzo is a rural and remote ancient region in the north-western corner of Spain, or Castilla y León, which until recently was one of Spain’s best-kept secrets. Now, with much investment and innovation, El Bierzo wine counts as one of the country’s up and coming stars within the wine industry. You’ll pass through this region along the Via de la Plata and the French Way as you near Santiago de Compostela.

Wine is as common as water along the Camino so if you enjoy a sip make sure you indulge while on your Camino journey. But remember that you’ll be walking long days and sometimes in the sun, so ensure you drink plenty of water to keep you hydrated – the last thing you want is to face 25km the following day with a hangover!

All that being said, we recommend the best accompaniment for any wine is the company you share it with. So, we suggest that after a long day’s walking on the Camino de Santiago you sit back and relax with a bottle of the local finest in the company of a good friend or another pilgrim that you’ve met along the way. Exchange stories, ideas, and lessons. Listen, open up, get it off your chest and come back from your Camino having experienced all the wonderful joys of the Camino both tangible and intangible.

Originally published on 2nd May 2019

It's getting hot out there! Make sure you stay hea

Where is this? 📍 👣 For some of our seasoned

Get some extra Camino Training on St James Day, Sa