Home > Blog > The History and Making of the Cathedral of Santiago

Saint James is an apostle of Jesus that is said to have brought Christianity to the Iberian Peninsula. He was beheaded for his beliefs in Judea and his body was brought back to Galicia, Spain. His tomb however was abandoned as a result of heavy persecution of Christians in Spain at this time.

Many years later, the hermit Pelagious` was said to have witnessed strange lights in the sky which led him to the long-abandoned tomb of St James. When the tomb of Saint James was discovered King Alphonse II declared Saint James the patron of his empire and had a chapel built at that place in 819 AD. This church was ruined by al-Mansur’s Moorish army in 997. Almansor did however leave the Apostle’s tomb and surrounding relics undisturbed. Construction on a new cathedral began in 1060 and concluded in 1211. As more and more pilgrims followed the way of Santiago. The original chapel soon became the cathedral of the new settlement, Santiago de Compostela.

The cathedral is a key point in the Way of Saint James since early middle ages. It marks the end of the historic Camino de Santiago route.

In the 12th and 13th century the town developed great importance, and Pope Alexander III declared it a Holy Town, like Rome and Jerusalem. Pope Calixto II declared that the pilgrims who went to Santiago in a Holy Year should be free of all their sins. El Año Santo (Holy Year) is celebrated when the Apostol’s day (July, 25) is on a Sunday. 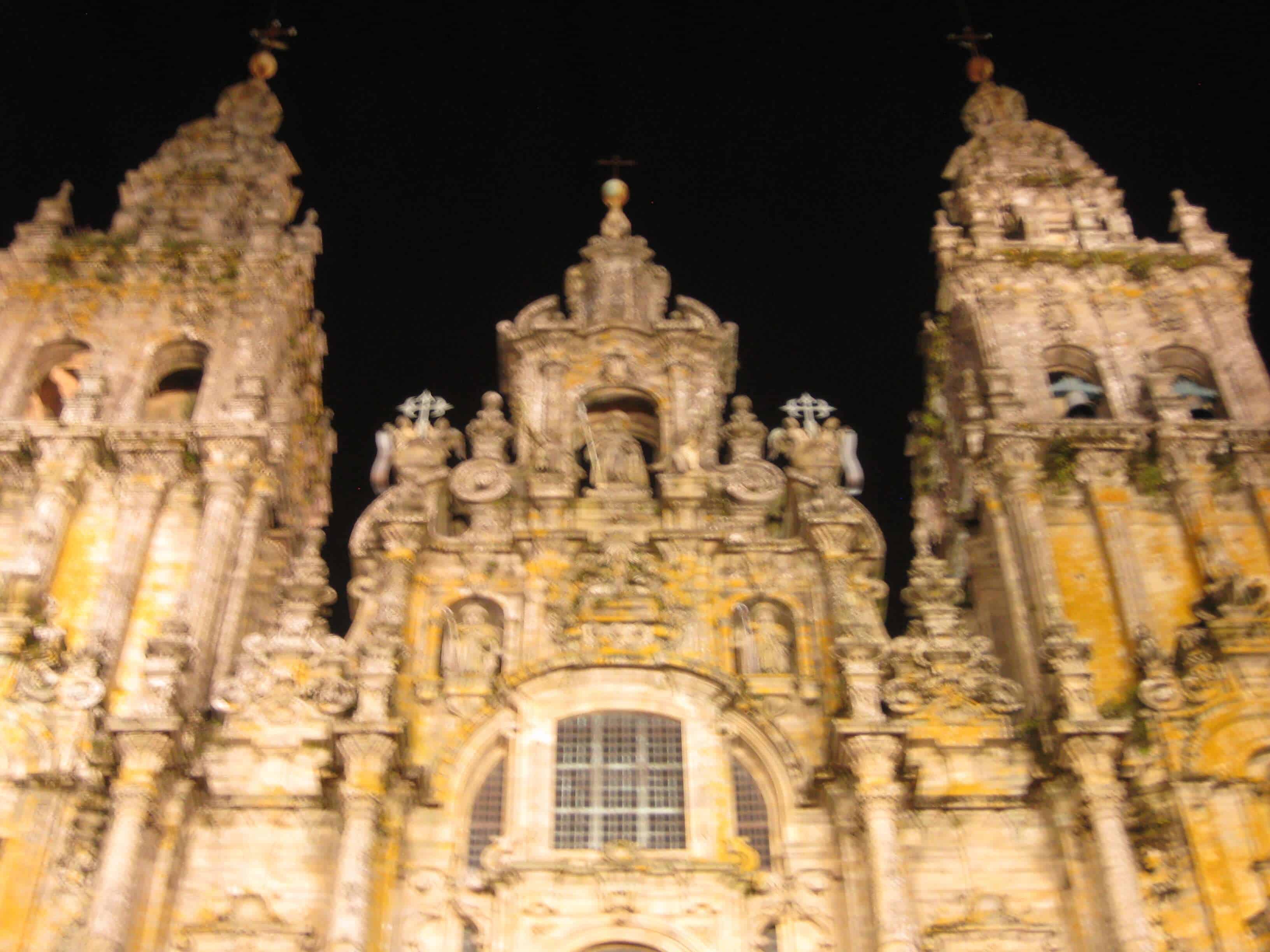 The most impressive piece of architecture in Santiago de Compostela is undoubtedly its Cathedral . One of the main attractions of this cathedral is the 12th century Portico da Gloria. In recent years, it has become particularly significant for pilgrims walking the Camino to reach this cathedral at the end of their journey along the Camino de Santiago. One of the three rituals that pilgrims perform on arrival is to touch a certain place on the column.  So many pilgrims have laid their hands here to rest their weary bones that a groove has been worn in the stone.  Other notable features of the cathedral are the two towers, which were built over a span of several hundred years.

The Interior
Inside, the altar is composed of different influences from varying time periods. It depicts gothic aspects as well as 18th-century influences. The relics of St. James are located behind the cathedrals alter and can be viewed from the crypt.

A notable part of this cathedral is the Botafumeiro which dispenses clouds of incense through the use of a pulley mechanism. This is the largest censer in the world with a weight of 80 kg and height of 1.60 m. Eight tiraboleiros clad in red robes pull the ropes and bring it into an intensely quick swinging motion.
The cathedrals Chapel of the Reliquary (Capilla del Relicario) houses a gold crucifix said to contain a piece of the True Cross.

The Plazas
There are many squares and plazas to be seen throughout the city, but the most important are located around Santiago Cathedral. The Plaza del Obradoiro is the gathering place for pilgrims during the feast day of St. James. The name of this square is said to come from “Obra de Oro” (work of gold). It forms the center of the town.

Other Attractions
Another major architectural attraction in Santiago is the Rajoy Palace, which faces the cathedral on El Obradioro Square. The four-story granite building has an arched walkway, central columns and a triangular neo-classic feature of the apostle St. James.