Le Puy route, or Via Podiensis as it is known in France, is one of the four main pilgrimages through France heading toward Santiago where the tomb of St. James is said to be. The route was traditionally used by French pilgrims but also by other nationalities coming through Switzerland and from even further back in Germany, Austria, Poland and the Czech and Slovak republics. It joins with the routes from Paris and Vézelay on the French side of the Pyrenees. This route leaves from Le-Puy-en-Velay, an area in south-central France near the Loire River.

The terrain of this route varies but can be strenuous as it passes through the Pyrenees and different land types. There is also snow in the Aubrac during the winter and early spring.

This route ends at Saint Jean Pied de Port, but many chose to continue on to Santiago de Compostela via the French Way. This way dates back to Codex Calixtinus from the 12th century and is by far the most known Camino route internationally. This particular route is depicted in the popular film “The Way”, starring Martin Sheen. This movie has revived many people’s interests in taking this route. To complete this journey all the way to Santiago, it takes over a month. To learn basic french terms for the Le Puy Route, click here.

Pilgrims have been traveling to Santiago de Compostela for over a thousand years. Godescalc, Bishop of Le Puy went there in 951 A.D. and is said to be one of the first. At the height of its popularity in the middle ages over half a million people made the pilgrimage from different parts of Europe each year, many of them walking through the Le Puy route.

This pilgrimage to Santiago de Compostela has been popular ever since the remains of Saint James the Greater were found there. The significance of completing the walk at Santiago de Compostela is that the cathedral was built to honor Saint James, an apostle of Jesus who is said to have brought Christianity to the Iberian Peninsula. Saint James was beheaded and said to have been the first apostle martyred for his faith.

His body was brought back to Galacia, Spain and a tomb was built for him. This tomb soon became abandoned because of the heavy prosecution that Spanish Christians were facing at this time. Eventually, the tomb became rediscovered and King Alphonse II had a chapel built and named Saint James the patron saint of his empire.

The most popular era of this pilgrimage was between 1000 and 1500 A.D., even though numbers have dwindled at times due to political, social and cultural factors there has always been a steady stream of pilgrims trudging westward through France and Spain to Santiago. 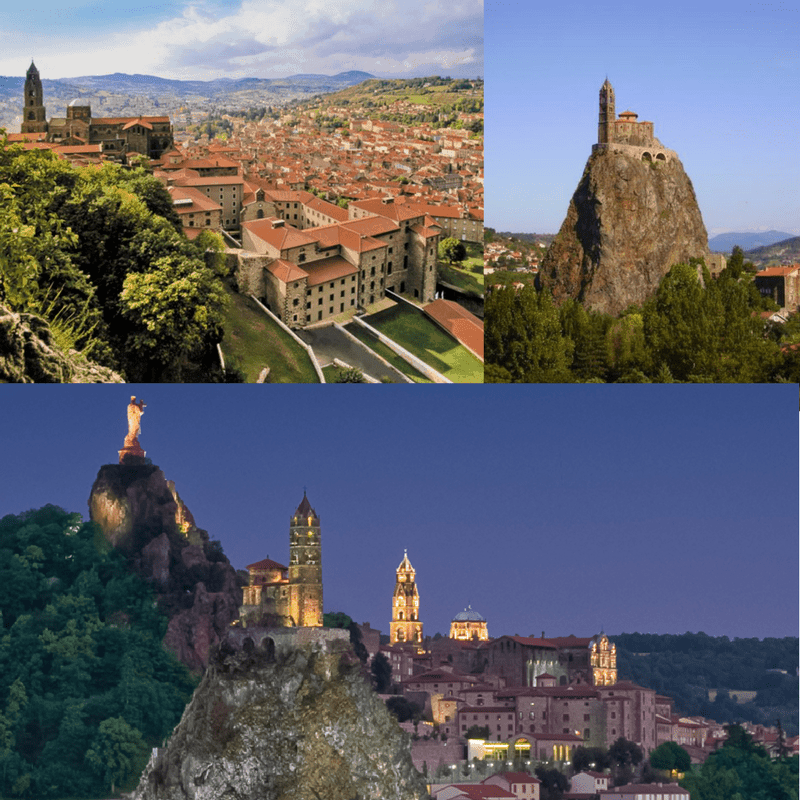 The Le Puy Route is very popular with French and German pilgrims as it runs from the heart of France into the popular French Way.

The Le Puy route stretches from Le Puy-en-Velay to the Pyrenees talking the pilgrim through hilly regions, over rivers, through lush countryside and through rustic villages, eventually joining up with the Camino Frances in St Jean Pied de Port, which continues on to Santiago de Compostela. To discover famous landmarks and landscapes along this route, click here.

To walk the full way, the journey takes about 33 days, covering about 750 kilometres. This route is unique because you are not only crossing France North to South, but also East to West. The different people and landscapes you come across will vary immensely as you will be crossing through small villages, volcanic landscapes, as well as the Pyrenees. Many of the villages you will come across are small mountain towns and you will reach a new one every 10 or 12 kilometers or so.