Fresh seafood is the most Traditional Galician food you’ll find on any menu on the Camino de Santiago.

With over 700 miles of coastline producing the best of seafood, you are guaranteed to enjoy the freshest traditional Galician food when walking the Camino.  Galicia’s traditional food is famous all over Spain and even Europe.  Galicia continuously out does itself year on year gaining new Michelin stars; in fact, it is the region of Spain with the most Michelin stars ensuring that it is the epicenter of Spanish gastronomy.  Bottom line, you’ll not go hungry in Galicia.

A Bit of History

In the Galician region, not only do the recipes heavily feature seafood, but they are also heavy with potatoes, either in the dishes themselves or on the side. Since the potato was introduced into the region, Galician recipes have started to feature the root, especially since it grows so easily on the coasts. Many Galician dishes also feature maze and wheat, since those crops grow the easiest in the climate and soil of the area.

While the majority of the dishes focus on using seafood, the are still traditional Galician dishes that use more common meats, like cow, pig, or sheep. However, since seafood is the most common and most uniquely Galician, below is a list of our top 6 seafood dishes that you must try when in the north-west corner of Spain. 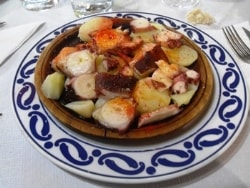 Adult octopus including the tentacles this is possibly the most common type of traditional Galician food, in fact for many Galicians they are the best part slow boiled until tender. Typically, the octopus is boiled in a copper pot, repeatedly to curl the tentacles of the octopus. Before serving tapas style in a small dish or a larger wooden plate for sharing, the tentacles are snipped into little medallions with some olive oil poured over and sprinkled with some salt and paprika. Traditionally, this dish will be served with potatoes and bread on the side. The best Pulpo I’ve ever tried on the Camino was in Milede on the French Way.

Percebes are barnacles and certainly could win an award for being the weirdest food source in Spain but yet, they are a delicacy in Galicia.  They can be costly which is mainly due to the fact that they are dangerous to catch.  The fisher many must try to pull them off coastal cliffs or rocks in between each crashing wave making it very dangerous work.  Eating percebes or Barnacles can be tricky too, you must pull them apart, split open the shell then suck out the flesh inside, which is truly worth the work.  The taste like a little bit of heaven, if heaven was in the sea.  Percebes are a must try when in Galicia to really travel, one should embrace the culture and really experience what it is like to be from that region.

Are in general the most affordable option on this ‘to eat’ list. Basic mussels are a mainstay of the local economy along the Rías Baixas or western coast of the region.  Usually served up with fresh lemon wedges as Mejillones al Vapor (steamed mussels) or in a paprika-spiced marinade called, Escabeche.  These salmon coloured abalones can sometimes be rubbery and definitely taste like “ocean” and their salty goodness is addictive which means you’ll have no problem eating an entire platter to yourself, yum!

Scallops are the symbol of the Camino itself.  The lines in the fanned out shell all coming to one point represent the many routes of pilgrimage to the same location, Santiago de Compostela.  They are also a symbol of Galician food as you’ll find them in most restaurants along Galician parts of the Camino. They are served steamed, in one half of their shell, either plain or with a mixture of onions, peppers, and breadcrumbs called vieiras gratinadas. A must try when visiting the north-west corner of Spain. 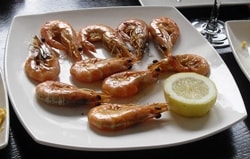 These crustaceans just may be the most widely recognized internationally of the huge array of seafood that is common to the average Galician.   These small, striped shrimp are caught in the local rías or inlets of the Atlantic Ocean so are abundant in the north-west coast of Spain. They seem to taste extra delicious in Galicia, maybe it’s due to the freshness or how they are served drenched in chopped garlic but somehow, even though they can be messy and a lot of work to de-shell they are always worth the effort.

Caldeirada is commonly known as Fisherman’s Stew, because it is entirely dependent on the fisherman making it. The traditional fish stew contains a mixture of fish and vegetables. There will often times be potatoes, onions, peppers, and/or tomatoes in the stew alongside any number of types of fish. The stew can also contain prawns, shrimp or other shellfish to add a variety into the taste. After a long walk or a day swimming off the coast, you should be sure to try this traditional dish with some local wine, especially if it has been a particularly cold day.

All of the fancy talk aside; the essential ingredient in traditional Galician food is freshness all along the coast there are fisherman working away and bringing the catch of the day directly to restaurant chef who are placing it on to your plate, therefore you can rest assured that whatever seafood you are eating that day will be the freshest.

As is true of any experience abroad, in order to truly enjoy your experience, you should fully embrace the culture. While you may not understand the names, anyone in the towns and villages will be glad to help you. Do not be afraid to ask questions. And most of all do not be afraid to try all of the new and excited foods of the region.

Read our list of top 5 wines along the Camino also to help you decide what to drink with your delicious Galicain food.