A Fascinating Camino Detour to Carracedo | Follow the Camino 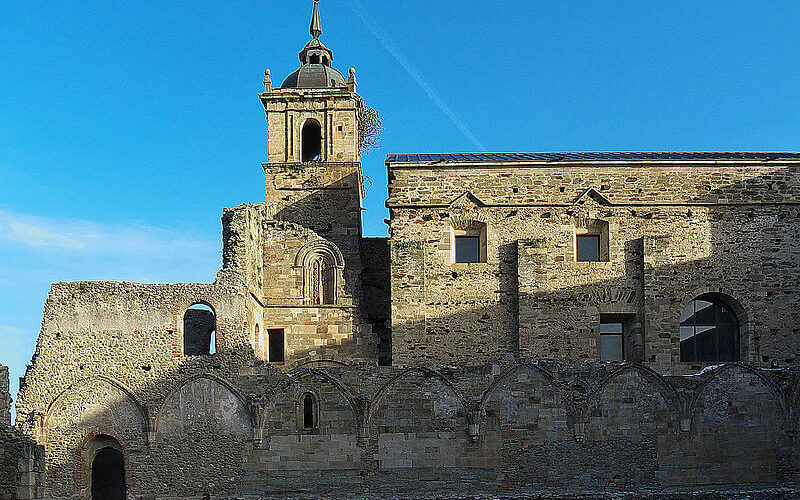 A variant of the Camino Francés starts at Camponaraya, just west of Ponferrada, passes the ruins of the Monasterio de Santa María de Carracedo, and returns to the regular route at Cacabelos, east of Villafranca del Bierzo. I had a special purpose in taking this detour because I was writing a novel, set mostly on the Camino, which features a ruined monastery.

To my delight, Carracedo fulfilled my hopes admirably and became the model for the monastery in my novel.

Carrucedo’s long history is intertwined with the changes in religious and political life in Spain over many centuries. The first monastery originated in 990, when King Bermudo II donated a farm to Benedictine monks fleeing the Moorish leader Al-Mansur.

In 1138 King Alfonso VII’s sister gave it to the Cistercian order.

By the beginning of the 13th century Sabta María de Carracedo had become rich and influential, but in the 14th, with the relaxation of monastic life, and the exchange of some of the monastery’s estates for political protection, its fortunes declined.

With the reform of the Cistercians in the early 16th century, however, it began to recover both economically and culturally. New buildings were constructed and some existing ones restored. In the 17th and 18th centuries, a guesthouse cloister, bell tower, and third cloister were added, and in 1796 a new neoclassical church was commenced on the site of the old one.

In 1835, most of the monasteries in Spain were disbanded and their property confiscated by the State and sold. During the years following, the monastery at Carracedo was largely looted and destroyed, and only the new church, the wings of the chapter house and the refectory were spared.

The site was declared a national monument in 1928, but the first restorations didn’t commence until the sixties.

On my visit, I was fascinated by the intersecting architectural periods in the restored structures, the changes over the centuries in the functions of its parts, and the architectural details that remain.

For example, three rooms dating from the 13th century feature elaborately carved stone tracery windows, columns supporting pointed arches, ribbed vaulting, a crowded medieval tympanum, and a grand 18th century fireplace. A Romanesque door opens to an area where there are traces of the floor of the three naves of a medieval church. From there, through a glass wall, you can look into the ‘new’ church that replaced the old one.

There are many other fascinating aspects of the complex, but the one that most piqued my interest was the description of the torno.

This was a cylindrical cabinet, with vertical divisions, set in a wall separating the former kitchen and the refectory, for silent and contactless delivery of meals from the cooks to the monks. This mechanism inspired one of the key mystery elements in my novel, The Roland Medals.

The Roland Medals – by Maureen Cashman

Australian author Maureen Cashman’s years living in a village on the Chemin de Saint-Jacques in France, and walking the Camino in France and Spain, inspired the setting for her intriguing new novel The Roland Medals. Camino walkers will love visiting and revisiting iconic places in this ‘mystery with history’.

In 1593, a wandering monk, Carmelo, creates a series of medals featuring Roland, celebrated in the medieval epic poem, ‘The Song of Roland’.  In 2012, Armi, a young Finnish Border Guard, flees a murderous partner and sets out to walk the Camino.

Although separated by five centuries, their journeys and stories, and the mystery that connects them, converge at a ruined monastery on the Camino de Invierno  near Las Médulas.

If you enjoy mysteries with touches of romance, historical fiction, love Spain and the Camino or just enjoy a great read, this is for you.

A gripping and fulfilling read.  Cashman has really researched all aspects, both historical and contemporary, to make for a very interesting and compelling story. Her style is clear and easy, allowing the reader to enjoy the richness of the plot, as well as the landscape and people. Once I started reading, I was hooked. I loved this book.

The Roland Medals by Maureen Cashman is available as an e-book and in paperback. See the website www.maureencashman.com for more information and glowing reviews.

Discover the Secrets of Spain for Yourself on the Camino!

Walk the Camino Frances and take the detour to Carracedo to discover this magnificent monastery. There are plenty of wonderful buildings all along the different Camino routes in Spain. This network of walking and cycling routes makes a fantastic active holiday for anyone with an interest in history, culture, and religion.

When you walk one of the routes of the Camino de Santiago with Follow the Camino we can add extra days and detours all along your journey. We can recommend some of the most interesting gems, like the Monasterio de Santa María de Carracedo and plenty more!

Since we began operating tours on the Camino we have sent thousands of happy clients along the Way of Saint James. Our travel options include guided and self-guided options, with totally customisable trips to suit everyone.

Explore the Camino for yourself and find your mystery.