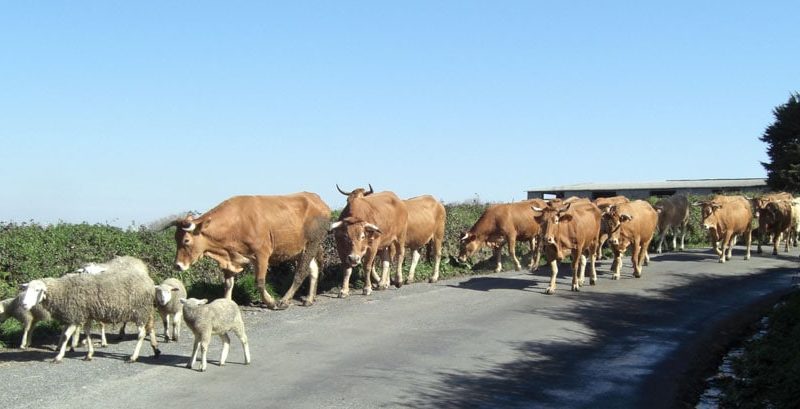 Legend has it that long ago a hermit living in Asturias, the northern region of Spain, saw strange lights coming from the Libredón forest. Following these lights led him straight to the tomb of St. James the Apostle. This walk made him the very first pilgrim of the Camino de Santiago. His path became the Camino’s Original Way, the Camino Primitivo.

The Camino Primitivo stretches from Oviedo to Santiago de Compostela which is 328 kilometres.

Stretching from the beautiful city of Oviedo in Asturias, through medieval Lugo, to finish at the tomb of St. James in Santiago you’ll experience both Asturian and Galician culture on the Camino Primitivo.

A route of contrasts, you’ll begin by leaving the cosmopolitan city of Oviedo to tackle hilly, mountain trails. Here, you’ll be surrounded by nature. Tune into birdsong and your own thoughts, before finishing your day in a quiet, rural village.

Just at the point where you may have had enough of your own thoughts, you’ll reach Lugo. This unique settlement is the only city in the world to be completely surrounded by intact Roman walls.

Here marks a turning point, as only a couple of days later you’ll link up with the bustling Camino Frances. Join pilgrims from all over the world to share your experiences and walk the final kilometres into Santiago de Compostela together.

The History of the Camino Primitivo Route

The Camino Primitivo was likely the route taken by King Alphonse II, the Chaste, on his trip to Santiago. He started from Oviedo, the capital of the kingdom of Asturias during the first third of the 9th century.

This monarch played a decisive role in confirming that the remains unearthed in Compostela belonged to the Apostle Saint James. King Alphonse II also sponsored the founding of the first basilica of the growing metropolis of Santiago. He also made donations and promoted the establishment of the first monastic community devoted to serving at the altar of Saint James.

The city of Oviedo marked the main starting point of the Original Way. However, it was also joined by pilgrims arriving from other parts of northern Spain and Europe.

It was probably the most travelled route until the present-day French Way consolidated its position as the major route in the late 10th century. At that time it started in Leon, the new capital.

Nonetheless, the Oviedo route to Santiago remained a popular alternative. This was due particularly to the spiritual value of the magnificent collection of relics along the way. Visit them at the cathedral of San Salvador de Oviedo, and the basilica of Lugo with its permanent exhibition of the Holy Sacrament.

Services on the Original Way

The many hospitals set up along the way bear witness to the importance of this route. Especially those in remote spots ensconced high up in the mountains. They served a fundamental purpose – serving and offering help to the pilgrims on the Camino Primitivo. These services were incredibly important, as pilgrims crossed areas that presented an arduous challenge for most of the year. During bad seasons, pilgrims would be battered with snowstorms, strong winds and treacherous paths.

Thankfully today the roads are better paved and signposted. This makes navigating this route very easy. Most people tend to follow this Camino in Spring, Summer and Autumn months which means snow is never an issue. The rolling hills make for picturesque walking outdoors with breath-taking views from the top. It is never very mountainous so regular light walking shoes are appropriate.

Hotels along this route range from 4 star to welcoming traditional guesthouses. You can choose to stay in a wide rage of accommodation on the Original Way of Saint James. One of the most common accommodation styles is communal albergues, but more private and comfortable options are also plentiful.

In addition to accommodation, there are plenty of wonderful cafes and reasturants waiting on the Camino Primitivo. Try some delicious Asturian food and sip on fantastic Spanish wine at the end of each walking day.

Check out a Brief History of the Camino de Santiago for more interesting facts about the Camino.

Listen to our client Rose’s story about her trip on the Camino Primitivo here:

Also, as you can see the Camino Primitivo is filled with interesting places so we picked our favourite ones and we are happy to them share with you!