Le Puy Route - An insider's guide to the second most popular Camino trail.

The Le Puy Route is very popular with French and German pilgrims, running from the heart of France into the popular French Way. The route was first taken in 950AD, when the archbishop of the town walked to Santiago for the first time. It begins in Le Puy En Velay, an extremely beautiful city with a volcanic mountain at the centre. Atop that is a church, Saint Michel d’Aiguilhe, which is dedicated to Saint James’ return to the town. Another one of the town’s popular attractions is the Cathédrale Notre-Dame du Puy, where pilgrims often visit to see the ebony statue of the Virgin Mary that was brought to the town in the middle ages. The town lies 130 kilometres south-west of Lyon, so it is easily accessible by plane or train. 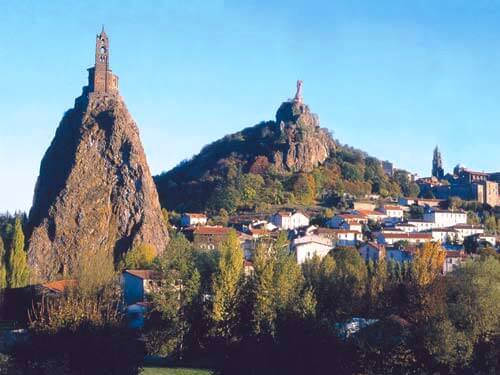 The beauty of the Le Puy Route is that you’re crossing France, not only from north to south, but from east to west. You’re passing through several regions with different people and many different features. On this walking route you’ll cross paths with the people who live in the Pyrenees, and the people that live in the small villages along the route. When you are walking the Le Puy route you are going to cross Auvergne, which is the centre of France, the Midi Pyrénnées and the Aquitaine regions. Every 12 to 20 kilometres, there is a beautiful village. Villages are small castle towns, often with rivers and surrounded by beautiful countryside. The towns on the walk are filled with character and often contain old historical monuments and shrines

One of the towns on the Puy route is Conques, a conclave town, where cardinals once convened to choose popes. In the section between Lectoure and Aire-sur-L’Adour (on the fifth stage of the walk), the farms are famous for their wines and brandy, particularly Armagnac and foie gras. On the last leg of the journey, Aire-sur-l’Adour is a beautiful, rustic, medieval market town, centred around a 12th-century cathedral.

It’s worth noting that the accommodations on this route are generally smaller than on the other routes. There are a lot of guesthouses, usually with just two rooms for people to stay in. The owners are very friendly and courteous to pilgrims and will sometimes even offer their own beds to guests. When you begin on the French Way, there are more hotels and larger accommodations. Generally, the type of accommodation you will be staying in depends on the size of the city or town. If you’re looking for food, the best places to eat are around Caroux, which is found a bit north of Toulouse. Try the confit duck: it’s a slowly cooked meal, generally served with sauteéd potatoes and salad.

If people want to drive to Le Puy En Velay, we offer a service where we collect the person’s car and bring it to them when they’re finished their walk. Often, French and German people want to drive to their starting point. The route can be quite hard on the legs because you have to go up and down quite a bit. It’s not that easy, but it has the most beauty-wise. In all, the journey takes about 33 days, covering about 750 kilometres. If you want to do it more quickly, cycling along a slightly modified route can cut the journey time in half. Once you’ve finished walking the Le Puy route, the trail joins up with the French Way, beginning at the Saint Jean Pied de Port in the Basque country.

If you this article on Le Puy Route, then feel free to check out our article on The Most Beautiful Villages of France.

If you have any questions on walking the Camino, our other Camino de Santiago tours or our services, then please don’t hesitate to contact us at info@followthecamino.com

Do you know any teachers planning a school trip fo

What did you pack for your Camino? 🎒 When you b

#2021 will be a huge year for the #CaminodeSantiag

Have you walked the #caminoportugues? It's one of

Are you ready to start planning your #springcamino

Have you tried the iconic Torta de Santiago? It's

Do you recognise this incredible museum? Here are

Umberto had a lovely time on our socially distance

Walking, exercising, and being outdoors is AMAZING

Gather up the family, it's time for an adventure!

Watching the sunset over Spain after a great day w

What does this pint of #Guinness have in common wi