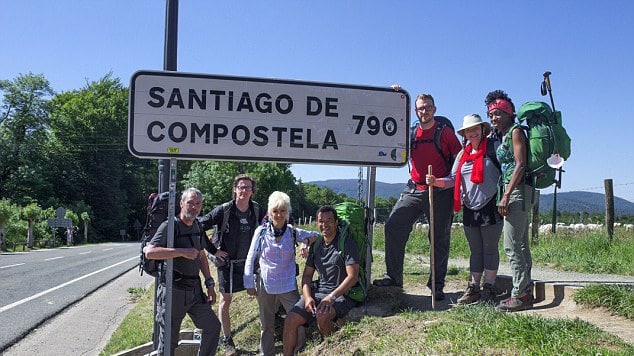 A three-part series called Pilgrimage: The Road to Santiago airs on Friday 16th March and continues as part of the BBC’s Easter religious programming over three weeks. The documentary ‘explores how relevant the medieval rites of pilgrimage are in today’s society’ and does this by getting seven celebrities to challenge their beliefs and live as modern-day pilgrims, taking on the Camino de Santiago. The Camino de Santiago is a network of old pilgrimage routes culminating in Galicia, Northern Spain which has become a very popular walking challenge. The seven familiar faces include reality TV star Kate Bottley, investigative journalist Raphael Rowe, actor Neil Morrissey, TV presenter and ex-soldier JJ Chalmers, Irish comedian Ed Byrne, reality TV star Debbie McGee and 90’s pop-star Heather Small.

The Challenge of the Camino

The group spends 15 days joining hundreds of other pilgrims along the 800km pilgrim path peppered with interesting encounters and sharing anecdotes of self-discovery. They follow part of the Camino Frances, or French Way, travelling from the French Pyrenees to the Cathedral of St James in Santiago de Compostela. Their challenge is to live a simple existence and walk in difficult conditions, however, they are never far from stunning scenery and rolling countryside, visiting many significant religious and historic landmarks. Each of them has to give up their luxuries and modern conveniences, carry their own bags and sleep in hostels. The journey gives them a chance to reflect on their experience and challenge their beliefs as well as discuss ethical and spiritual issues along the way.

The first episode aired on Friday 16th March on BBC2 at 9 pm. It starts by showing the celebrities arriving in Biarritz in France and making their way to the start of their pilgrimage at St Jean Pied de Port. They start off in the mountainous Pyrenees region, crossing the border from France into Northern Spain. In 2017, 5,768 British pilgrims completed their journey at Santiago de Compostela with most of them travelling on the Camino Frances.

Debbie and Heather Meet a Pilgrim at a Cafe

During Episode 1, Debbie and Heather meet a young pilgrim over coffee who had walked the Camino with his Dad in 2014. His father became ill during that trip and had to travel home in an emergency and subsequently discovered he had cancer and sadly passing away just before Christmas last year. The young man explained how he was now walking the Camino on his own in honour of his father and hoping the walk will help him come to terms with his death. The son was walking in his father’s boots and had his Pilgrim passport and a prayer stone from their 2014 trek. Debbie also spoke frankly to them about losing her husband, the entertainer Paul Daniels and trying to deal with it by keeping herself busy. The three of them chatted about how the Camino was helping them deal with grief and how it was easy to meet strangers, share stories and bare their souls without fear of judgement. Finally, Debbie reflected about how the Camino is so special for pilgrims being easy to open up emotionally to each other.

Our Vegan on the Camino Ebook is full of tips for our plant-based clients, from restaurant recommendations to useful phrases!

Ed Byrne and Reverend Kate Complain in the Hills

Irish Comedian Ed Byrne gets frustrated at his fellow pilgrims because they are moaning a lot, joking that ‘dentists drills don’t whine as much as these people do’. He confides that this particular cohort of his group didn’t even understand that pilgrimages require walking, branding them ‘idiots’! Meanwhile Reverend Kate, who is renowned for her appearances on TV Show Gogglebox, explains that she didn’t realise that they’d actually be walking the Camino. She thought that, because it was for television, that they would be driven from one Camino hotspot to the next! On day two she is suffering physically and can’t fathom continuing for longer. She is somewhat perplexed because people are walking the Camino who don’t have any faith and she doesn’t realise what they hope to gain from the pilgrimage. She explains, however, that even her own faith is taking a knock as she’s suffering so much she doesn’t want to talk to anyone, never mind God! Even though the friction from the physical challenge and suffering makes them rub off a bit on each other, a confrontational encounter during the expedition brings them all closer together. 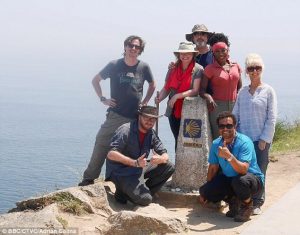 The second episode sees the gang of seven travel from Navarre to Sarria in order to take on the Last 100km. Before this, they experience a ‘spiritual moment’ as they come across the famous Bodegas Irache wine fountain in a wall of the winery, where thirsty pilgrims can drink wine straight from the tap! Episode 2 airs on Friday 23rd March, 2018.